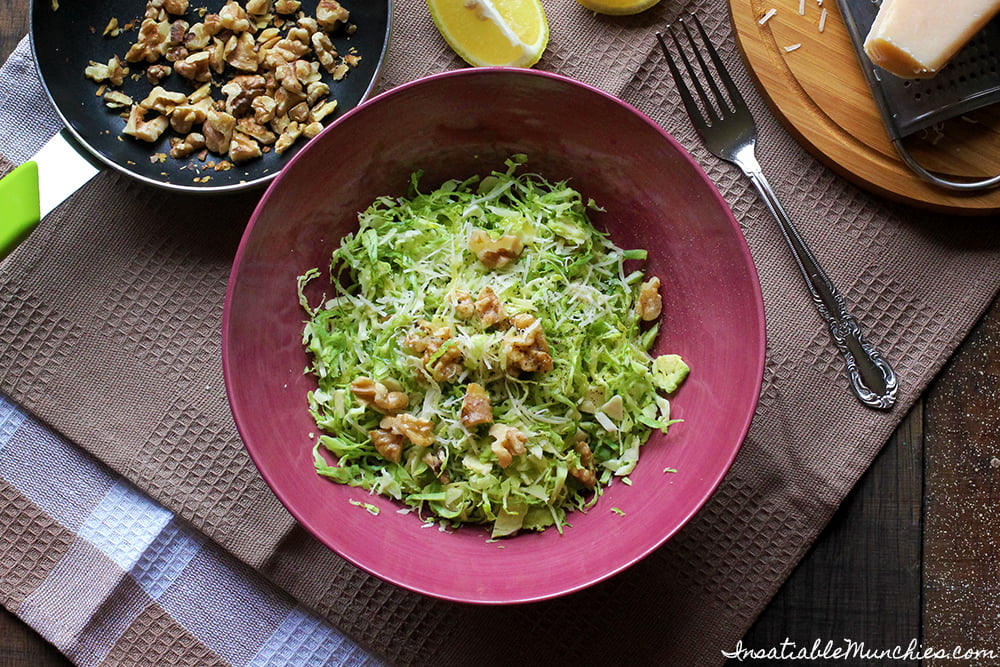 Y’all know that I absolutely LOVE testing and posting up recipes on the blog, but I’m sure it’s not as obvious that each recipe that I put up goes through hours of research, testing, a myriad of different versions, and agonising decisions regarding how it should look.

I usually start with either a craving or ingredients that I have in my kitchen, and then do tons of research to try and find interesting things to create with it. Sometimes I try out a pre-written recipe to start off with, or sometimes I start throwing things together and go from there.

Well, once in a while, a recipe just doesn’t go quite right, or just plum doesn’t work out the way you want it to!

Recently, I had bought a whole bunch of brussels sprouts on special at the green grocers, but had some left over after using them as part of a roast. So what now?

I found this nice looking idea on Gourmet Traveller – a simple salad of shaved brussels sprouts, with toasted walnuts to add depth, parmesan to add flavour, and just lemon juice to dress it. Some versions of this recipe online also had olive oil to add moisture.

So of I went, to shred those tiny cabbage-looking sprouts. I do love a good slaw, in many variations, so I was similarly excited about this particular salad. After all, in my research, there were many who described it as a more delicate cabbage-y flavour.

Well, no matter what I did, this salad was dry, and had a somewhat astringent after-quality to it. Even adding olive oil didn’t do much in terms of lubrication. The brussels sprouts themselves had a light, peppery quality to it, similar to rocket, and that went quite well with the toasted walnuts and parmesan. But I couldn’t quite get around the texture issue. Adding more lemon juice made it super sour and seemed to accentuate the dry texture, and adding more parmesan just made it worse.

In all, it was a promising recipe, but didn’t quite work out.

How about you? Have you had any disappointing recipes that you couldn’t quite figure out?