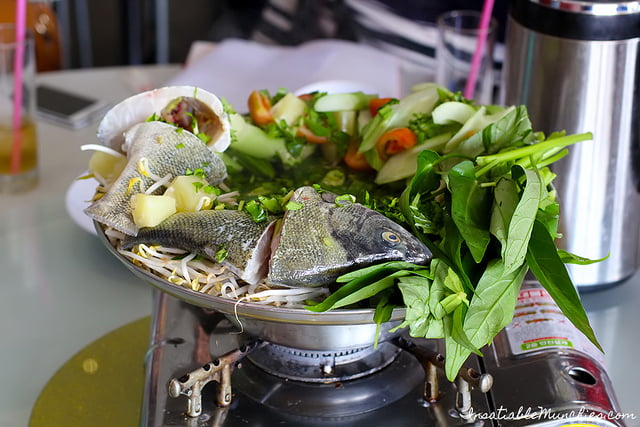 I’m always envious when people talk about going on pub crawls, since I’m slightly allergic to alcohol – tasting is okay, drinking is apparently not. I always feel like I keep missing out on all the fun!! So when Thang from Noodlies organised a food crawl in Canley Heights with the Fairfield Council, I jumped at the chance!

6 restaurants in 3 hours, will we SURVIVE THE EATING????!!!! Well Thang, Jeroxie, Amy, Christine, Isaac, Kate and I were going to find out.
First stop was at VyVy Garden Cafe, to start the morning off with some Vietnamese drip coffee.

Coffee is different in Southeast Asia. From the roast to the grind to the brew to the sweeteners, there’s a certain richness and aroma to the coffee that I’ve yet to find from local baristas around Sydney.

The mere mention of Vietnamese coffee instantly conjures up images of the drip filter, passed down from the French colonial times. Coarsely ground dark roasted coffee is added to the top of the filter, which is placed on top of a glass that contains your condensed milk. Hot water is poured over the ground coffee, and the resulting brew drips through onto the condensed milk below. The drip filter process is long – there isn’t anything more than gravity to hurry it along – but the resulting coffee is thick and rich, and the condensed milk add a creamy sweetness to it.

When warm, the aromas hit you as you raise the glass to your lips, providing an instant wake-up call. When poured over ice, the coffee provides a refreshing pick-me-up, a great cure for the monday-itis!

Takeaway coffee cups in hand, we move on to our next stop – Bau Truong.

The original Bau Truong started in Cabramatta when times were violent. The owner used to have drug addicts come into her restaurant, eat, shoot up at the table, and then leave without paying. There were even people passed out on the street in broad daylight.

But a belief in her food has held her through those dark days, and today, her daughter and son have joined her in opening up two other branches in Canley Heights and Marrickville.

Beautiful vietnamese tiles adorned the walls in this recently-renovated restaurant, and a gorgeous graphic design stretched out across the ceiling.

But I had to tear my eyes away from the gorgeous decor because there was an epic spread laid out especially for us! It instantly reminded me of family and home – the spread was the homely feast my friends’ mothers would put out when we visited for a meal, but on a whole other level!

We were greeted by Michael, the son, who painstakingly explained every dish that we were about to eat. We started with Ngheu Cuon, which were fresh rice paper rolls filled with water chestnuts and pipis. Michael explained that in Vietnam, snail meat is often used instead of pipis, but they’ve changed it slightly for the Australian palate.

Bo Lui followed, which consisted of curried spiced beef cooked on skewers, and today we were having it with slices of unripe plum, enveloped in lettuce leaves and dipped in a sweet-salty chilli sauce. Apparently in Vietnam it sometimes is served with starfruit or raw banana instead, for a slight astringency to balance out to flavourful beef.

Of the three noodle dishes we got to try, I highly recommend the Bun Suong, vermicelli and prawn cakes are served in a sweet pork knuckle soup base that is heightened by fermented bean paste and chopped peanuts, and is oh-so-addictive. The slices of pork are tender, and the prawn cakes are bouncy and light, like an extremely premium fish ball. Michael informs us that the prawn cakes were made fresh the night before, and I could definitely taste the labour of love. With the addition of shredded fresh water spinach and thinly sliced banana flower, this bowl of noodle soup was almost reminiscent of a salad, and I wouldn’t have any qualms ordering this in the hottest of summers. Let’s put it this way: I knew we were going to be eating lots and had to pace myself, but I finished the bowl of soup anyway. It was that good.

No sooner did I have the last slurp of my noodles, we were off again, this time to Diem Hen, down the road.

Thang recounted how his mother would often serve similar dishes while he was growing up – she would buy a whole fresh fish, and use it to cook two dishes: a hot pot of sweet and sour soup filled with fresh vegetables and chunks of firm white fleshed fish, and a caramelised fish cooked in a clay pot, with its dark salty-sweet sauce that serve as an aromatic partner to soft white rice.

The Sweet and Sour soup came in a unique looking pot that had a wide, flat rim around the top. The bottom held hot soup, and the rim was to hold the raw ingredients, to prevent the crisp vegetables from getting soggy and overcooked while the soup came to the boil.  The stock had a great depth of flavour, while the wide range of vegetables on the top added a freshness to the dish. Amongst these was something called the elephant ear stalk. When sliced, it resembled large celery stalks, except for its spongy interior, perfect for soaking up all the intense soup.

The accompanying caramelised fish was deep and dark in its flavour, which was a perfect use of the fatty belly of the fish. Apparently the flavour could get deeper and darker still, when the fish is braised for a longer period of time. The use of the clay pot is customary, and Thang recounted times when he’s had this fish dish at home with clay pot-cooked rice, with a brown rice crust at the bottom to add another dimension to the meal.

With three eateries down and three to go, we were starting to feel the effects of food coma starting to fog our brains. What will become of us by the time we reach the end? Stay tuned for Part 2 of our Canley Heights Food Crawl!

Note: Tammi of Insatiable Munchies and other bloggers mentioned in this post dined as guests of Fairfield Council and the restaurants listed.