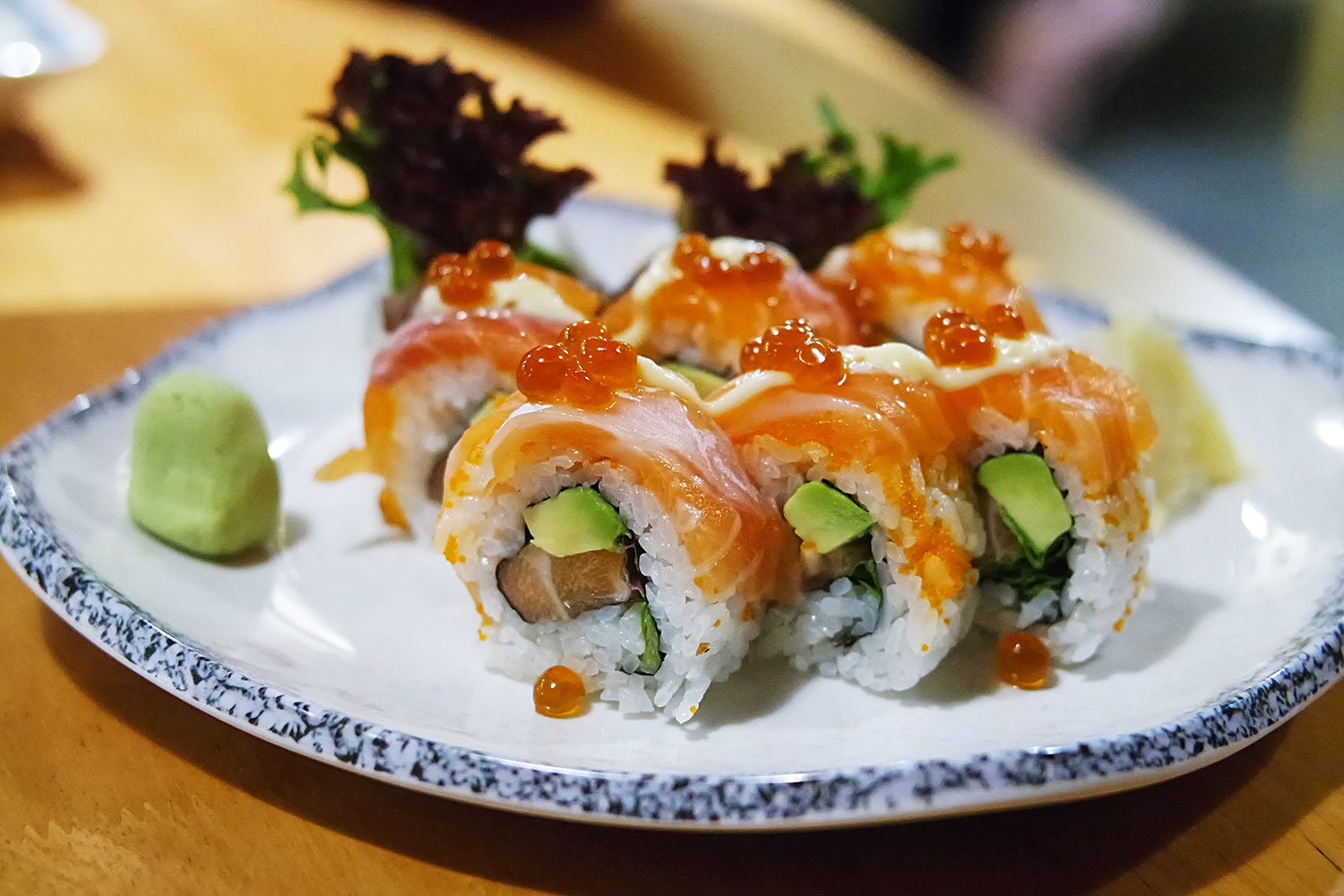 Eastwood has stealthily become a bit of a food hub, what with places like The Mandoo opening and offering amazing noodles and dumplings, and other stalwarts like Jean’s Chilli Chicken continuing to offer their brand of fire breathing late-night eats!

So when I heard that there was a new Japanese restaurant opening up down the road, I simply had to go and give it a go!

At first glance, Tounoya seems to be modelled after George Street late night karaoke favourite, Mizuya – right down to it’s touch screen ordering system and wooden booths. But what about the food?

Their menu offers all the Japanese usuals – from sashimi to gyozas – with some Korean influenced dishes like Kimchi fried rice thrown in, probably for the large Korean population in Eastwood.

The prices seem a touch uh, luxury, for an area like Eastwood – which is not exactly bereft of Japanese eateries – but not so luxury that you wouldn’t fork (chopstick!) it over for a nice sit down dinner.

We started with the usuals. 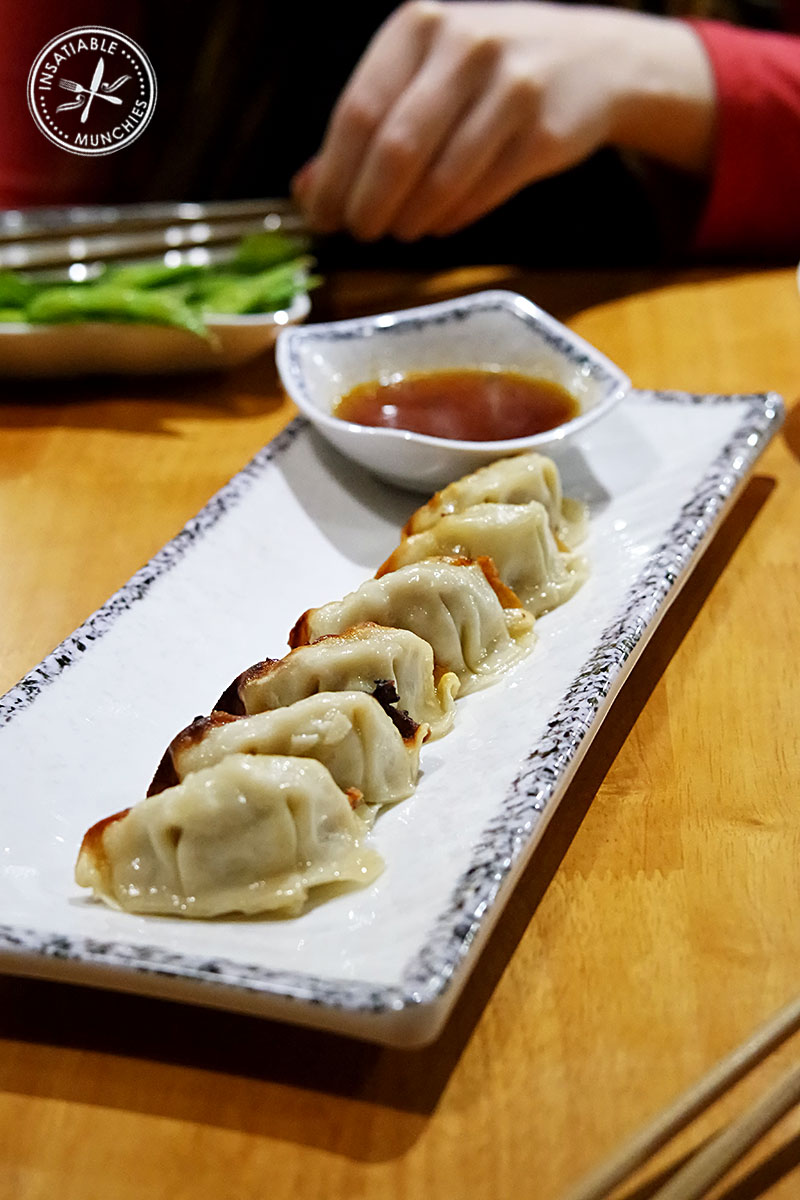 The Gyoza, $8.20 for 6, were okay, and pretty much as expected. It’s just a touch cheaper than Sakae, down the street, so that’s a good start, right? Well that good start was quickly ruined by the edamame (not pictured) that came to our table STONE COLD. Now I know that edamame – the amazing green soy bean that gives us hope that beer snacks can be healthy too! – can be had hot or cold, but if I wanted it freshly defrosted from the packet, I could’ve had the packet that is sitting in my freezer rather than come out to a restaurant for it. Moreover, it didn’t come with an extra bowl for the pod shells – which I would’ve thought was pretty standard by now? Maybe it was just as well they didn’t, because we were hard pressed to fit gyoza, edamame, AND ordering system on our little table for two.

Oh, didn’t I mention that the touch pad ordering system isn’t actually mounted to anything? I ended up having to eat with the touch screen sitting on my lap. Not a great experience when I’m constantly afraid of dropping it. 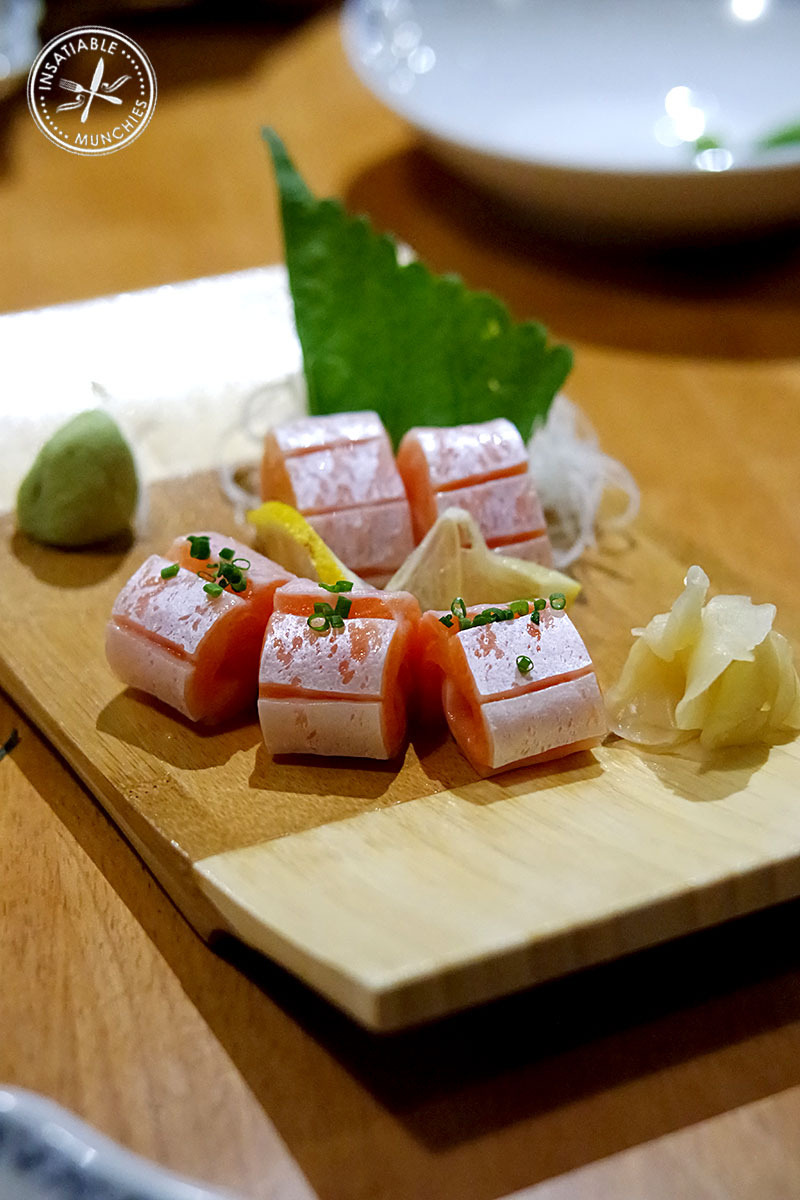 We also had the Salmon Belly Sashimi, $12.50 (my favourite!), which were laid out in good sized slices on a wooden platter. Fresh and unctuous in a way that salmon belly is, this was just another tick in the ‘this is average it didn’t do too badly’ department. 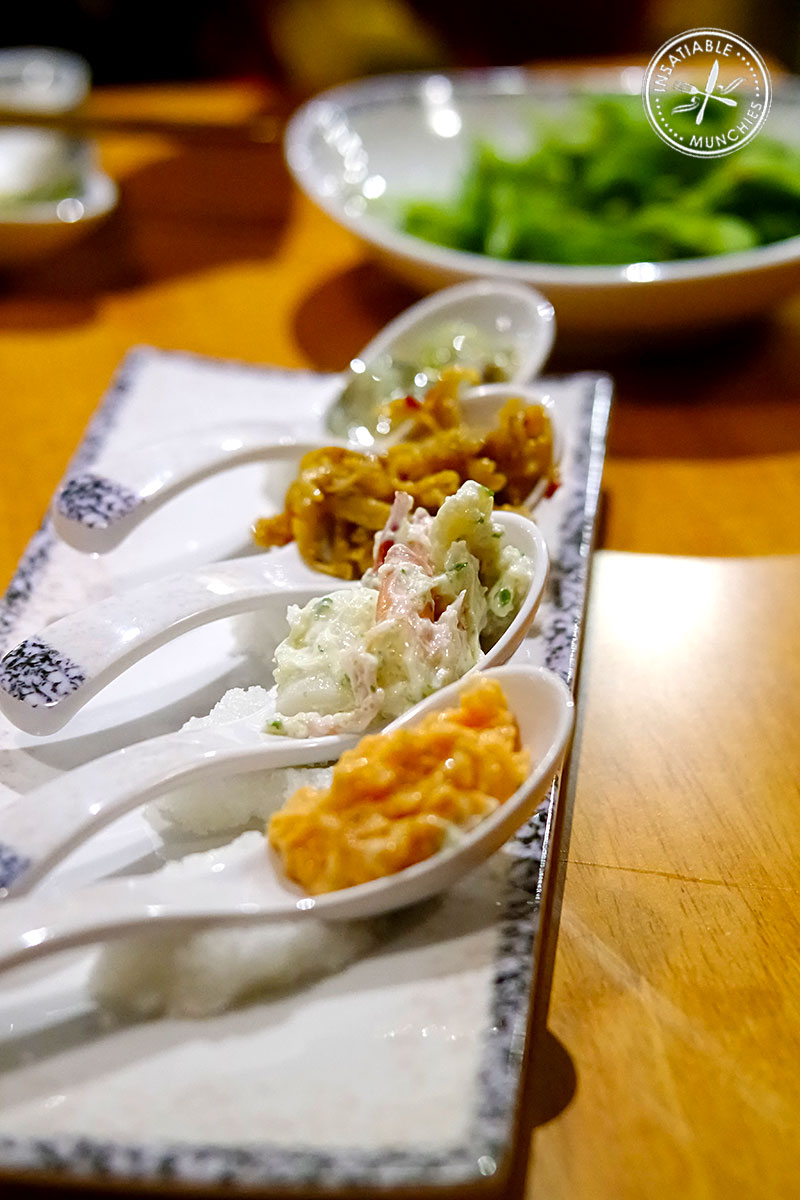 The Cold Spoons, 4 for $12.80, looked interesting on the menu, if not a touch pricey. In reality, it was just little scoops of toppings that were usually used on gunkan (or ship) sushi, and they’ve just repurposed it to be on spoons. No very special, and a bit of a waste of time, in my opinion. 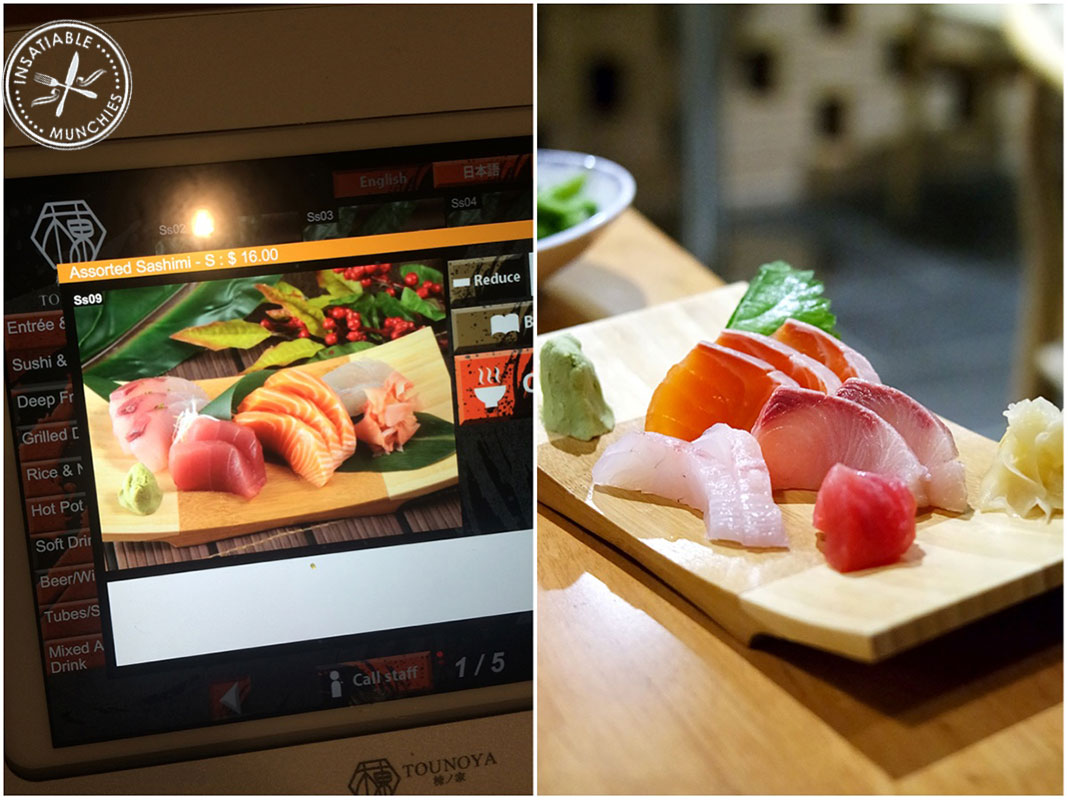 Sashimi, hard to go wrong with it if your fish is fresh, right? Well, kinda, if you assume that you’ll be getting the right amount of fish to begin with. We ordered the smallest of the assorted sashimi options, and realised after the plate came out that we were actually missing a few pieces.

The picture in the menu shows very clearly how many pieces of each thing we were going to get, and with sashimi, there is very little wiggle room. Most sashimi prices are precisely based on number of pieces, and to shortchange a customer is a MASSIVE no-no. We didn’t notice this right off the bat, but after we had a niggling feeling we checked the pictures, and lo and behold, there was the mistake. So we told a staff member, who very nicely apologised, and said that they would get us another plate of sashimi.

And it came out exactly the same as the first time.

At this point, we felt like we were getting more than we were going to anyway, so we didn’t bring it up again, but I really do hope that they understood what exactly it was that we were complaining about the first time, or they will be having many angry customers on their hands. 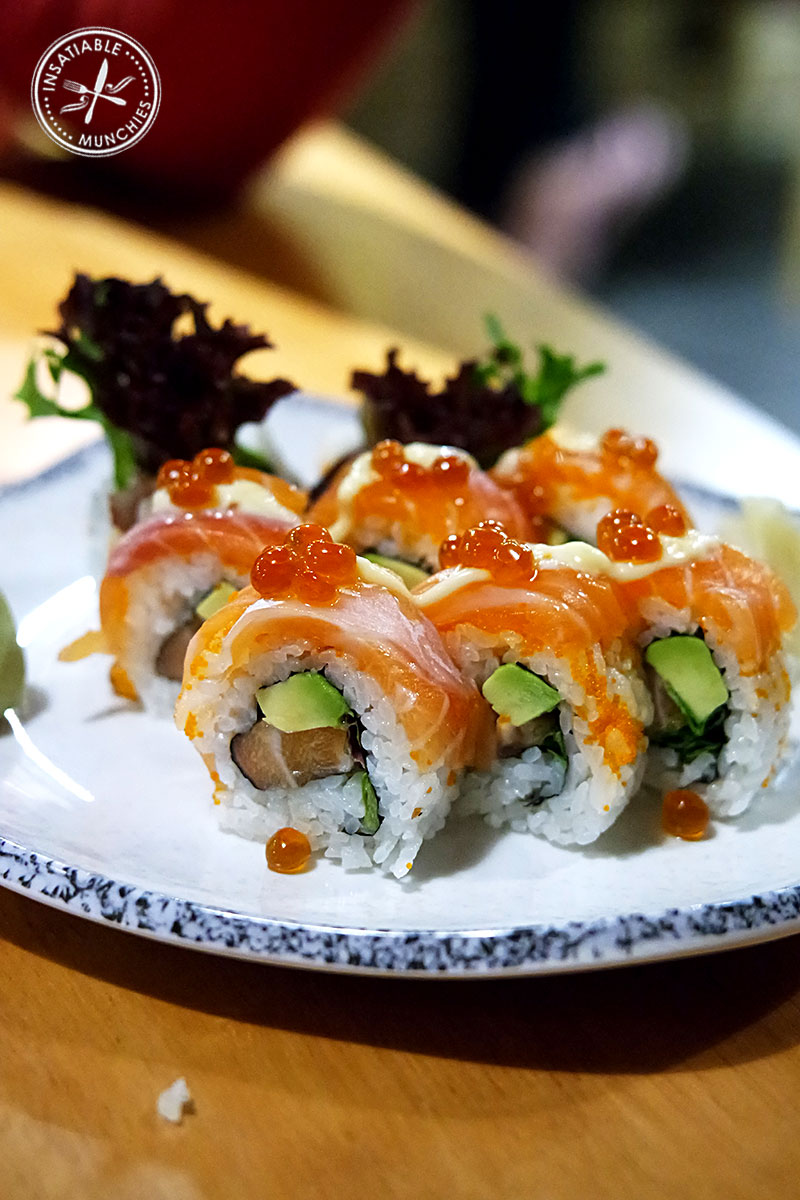 And finally, the Coral Inside Our Sushi Roll, $15. Again, it was in the okay-but-not-special category, and really after the thing with the edamame and the sashimi we were just ready to call it a night.

It was really sad, since I was quite looking forward to a brand new Japanese joint in the neighbourhood, but as far as I have experienced, it really just seemed like a pale imitation of Mizuya, which I would rather have gone to instead. 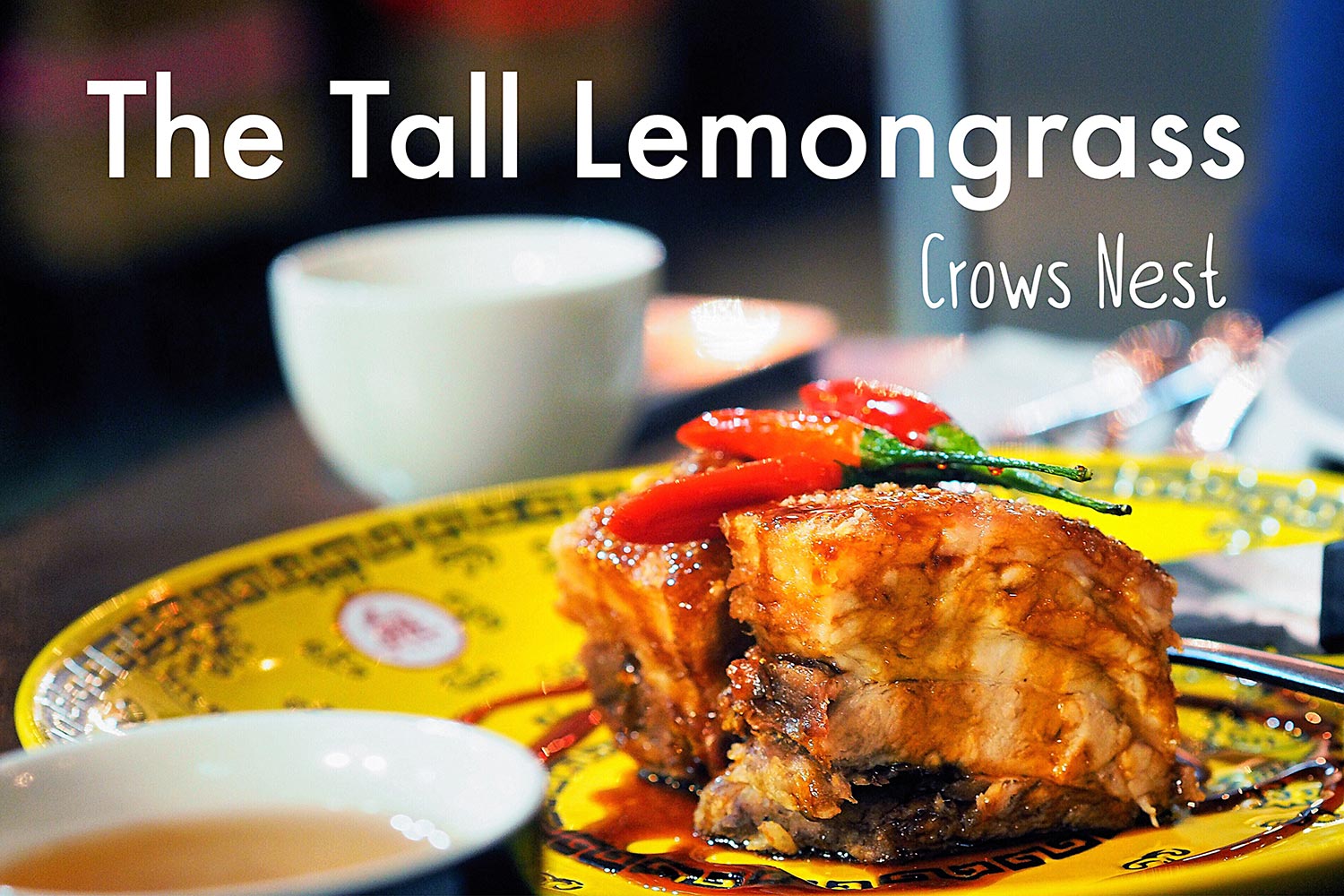 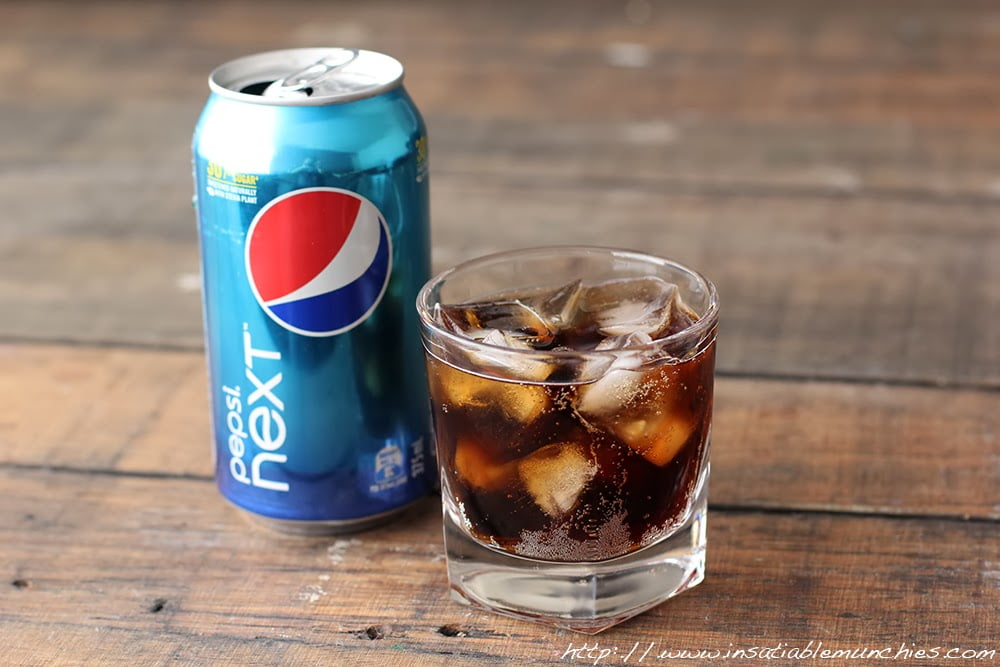 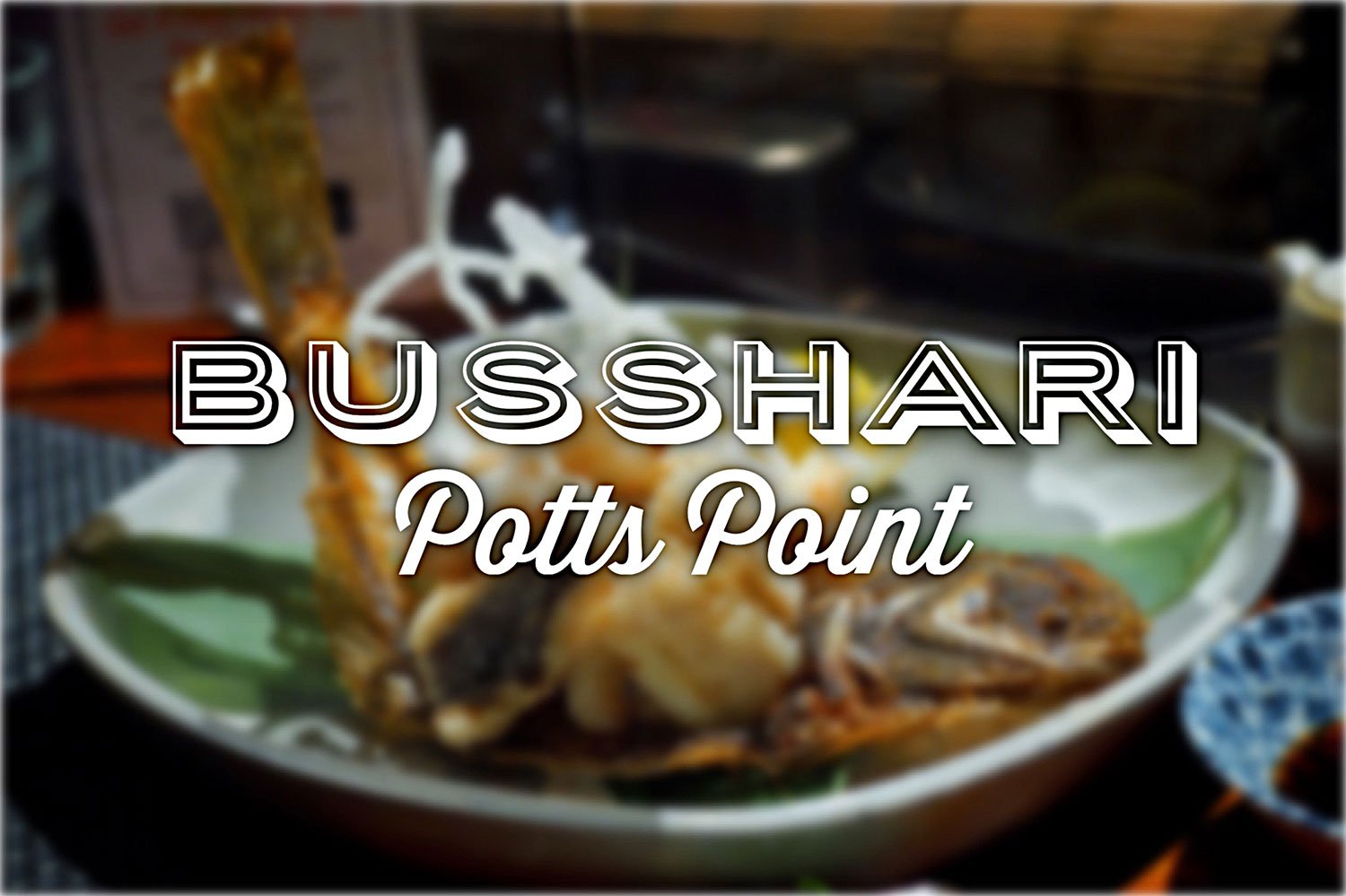