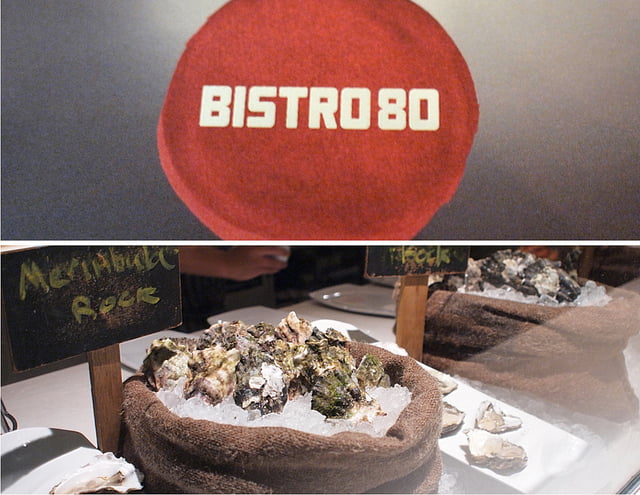 On a recent food blogger gathering at Fat Noodle (post about that later), it was decided that while we were at Star City, Bistro 80 would be a good place to go for dessert.

But before I could even contemplate any of the sweet goodness, I absolutely had to try the Flavours of Jamon, $40.

I have this thing about cured meats, and believe me when I say that the pure excitement of ordering this jamon just made my eyes light up. What is jamon? Well, very simply, jamon (pronounced hah-mon) is Spanish ham. Pigs are fed acorns and the resulting cuts of meat are then brined and cured. Similar to Italian Prosciutto, some say that jamon is cured for longer…although I can’t say for sure until I get to cure my own! =)

So. The platter. The jamon was expertly presented by our wonderful waiter, Peter, much in the way cheese is presented. The first was from a white pig, which was ( I’m told) fed a rather restricted diet and kept really high above sea level. The next was a black pig that was fed a mixed diet of acorns and grass, and the last was fed an extremely restricted diet of just acorn. (I tried my best as to remember this all correctly, but excuse my pockets of lost information!)

The white pig had a lovely flavour that reminded me of macademias. Lightly oily and nutty, this particular jamon had a great silky feel in the mouth and tore away much more easily than the other two.

The second had a slightly chewier texture that was similar to that of prosciutto. It also had darker, meatier flavours, and the saltier edge was more apparent to me. The cornichons (think French gherkin) really helped in this case, since the crunchy, sour/sweet of the cornichons provided a great foil to the chewy salty/smokiness of the jamon.

The third (I apologise in advance for my unrefined palate!) tasted quite similar to the second to me. Salty and chewy, the first bite held a glimmer of difference to me, but upon trying to more clearly discern the difference in taste in the consequent bites, I just lost all difference completely. It was almost as if my taste buds swooned in the utter delight and there was nothing else I could do in the meantime to revive them. Maybe this is a little like Impressionism – you get that fleeting moment, but when you try to concentrate on it you lose the beauty of it all.

I shall try again, next time. I promise!

And now, on to the dessert!

The Milk Chocolate Mousse was suggested by the ever-helpful Peter-the-waiter as the first thing to try. Velvety mousse sat below a viscous river of salted caramel and a layer of heavily aerated vanilla milk foam. I desperately tried to catch a shot of that beautiful cloud that was rapidly, and rather tragically, deflating fast. Maybe it’s that impressionistic thing again – get it quick or lose it forever. Either way, the mousse was one of my absolute favourite things for the night. In the mouth, the foam left the comforting aroma of milk while the silky mousse rushed in with it’s chocolatey richness. Finally, that dense, molten lava of salted caramel coated my tongue in it’s heavy and heady blanket of complex sugary goodness.

While the Creme Brulee hit all the right spots for me – glass-like melted and scorched sugar delicately perching atop soft, smooth, slightly-set (excuse the alliteration) custard – the ‘honey’ bit of it went largely unnoticed. It had a great complexity in its sweetness that ranked it above the run-of-the-mill Creme Brulees that you get at some pseudo-gourmet eateries, but I personally didn’t notice enough to place a tag on it that says, “Honey”. This also being my first ‘proper’ exposure to rhubarb (which really reminded me of celery) I think I might have been a bit more intrigued by the compote served with the dessert.

The Exotic Fruit and Rum Savarin – Savarin being a yeast cake that has sort of bread-y texture with a cake-y denseness and soaked in a (usually alcoholic) syrup – was light and enjoyable, but nothing that I would run around and do cartwheels about. It’s a good end if you’re having a heavy dinner though. The fruit was just slightly on the tart side, and was nice with the texture of the juicy cake. The sorbet was nice and light, but not quite essential to the dish. To me, anyway.

If you like your desserts thick, rich, and decadent, then the Dark Chocolate Tart is the dessert for you. A fudgy filling is topped with a silky smooth ganache on the top. Served with a mandarin sorbet, this fudge needed that citrus hit to prevent me and my tastebuds from descending straight into chocolate-induced insanity. The grapefruit on the side, I thought, was inspired, and the slight bitterness of the grapefruit actually enhanced the sweetness in the dark chocolate filling. Yum.

The best part of the Poached Raspberry Meringue was definitely the raspberry sorbet. The thing is though, the sorbet was almost exclusively all that I can remember about it. One quinelle was delicately perched atop a beautiful piece of architecture, it’s tangy sweetness dissolving into the mouth like a fresh, minty breath. Maybe because of the awesomeness of the sorbet did I not remember much about the rest of the dish…

Either way, so many gorgeoulicious desserts were sampled that night that we were promptly nicknamed the “Dessert Mafia” by the hilarious Peter-the-waiter. Besides the good food, the experience was certainly enhanced by his beyond excellent service, which deserves a standing ovation. He actually turned on the lights for us when the only other table in the room left, which really aided getting nice photos!

Which is why we left him this:

There was a little card thing that came with the bill, so we wrote a little something for him!! :D:D 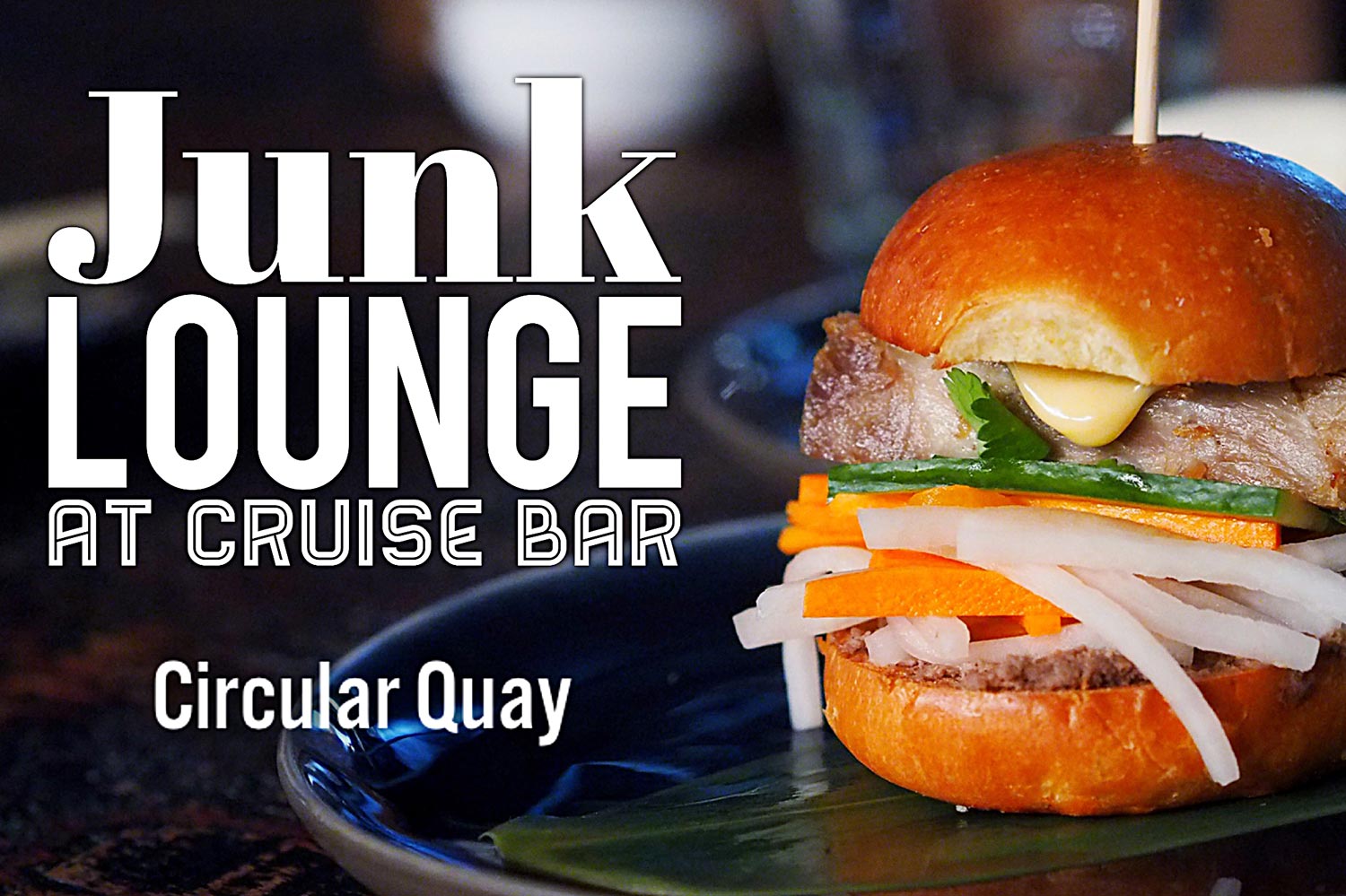 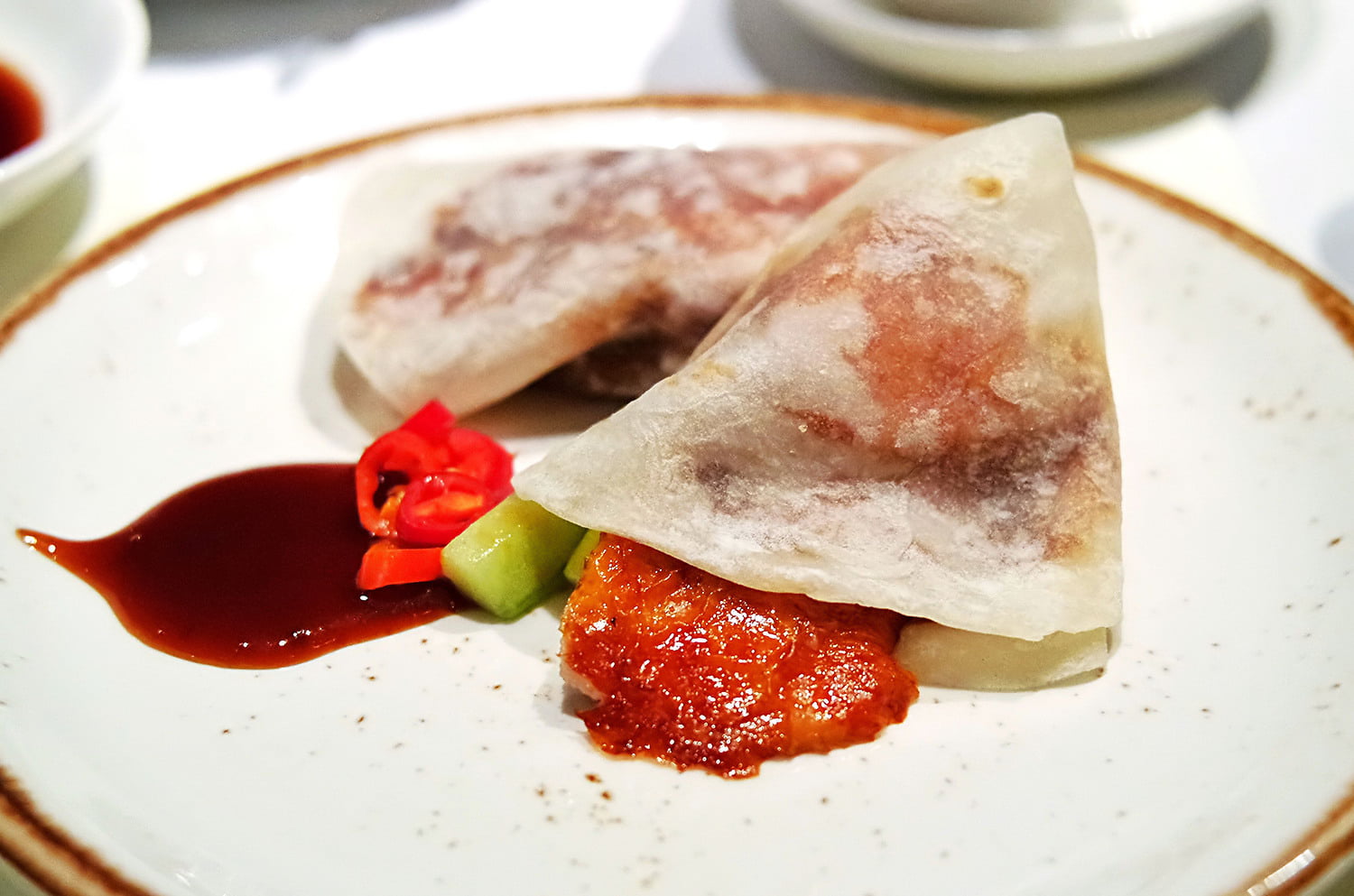 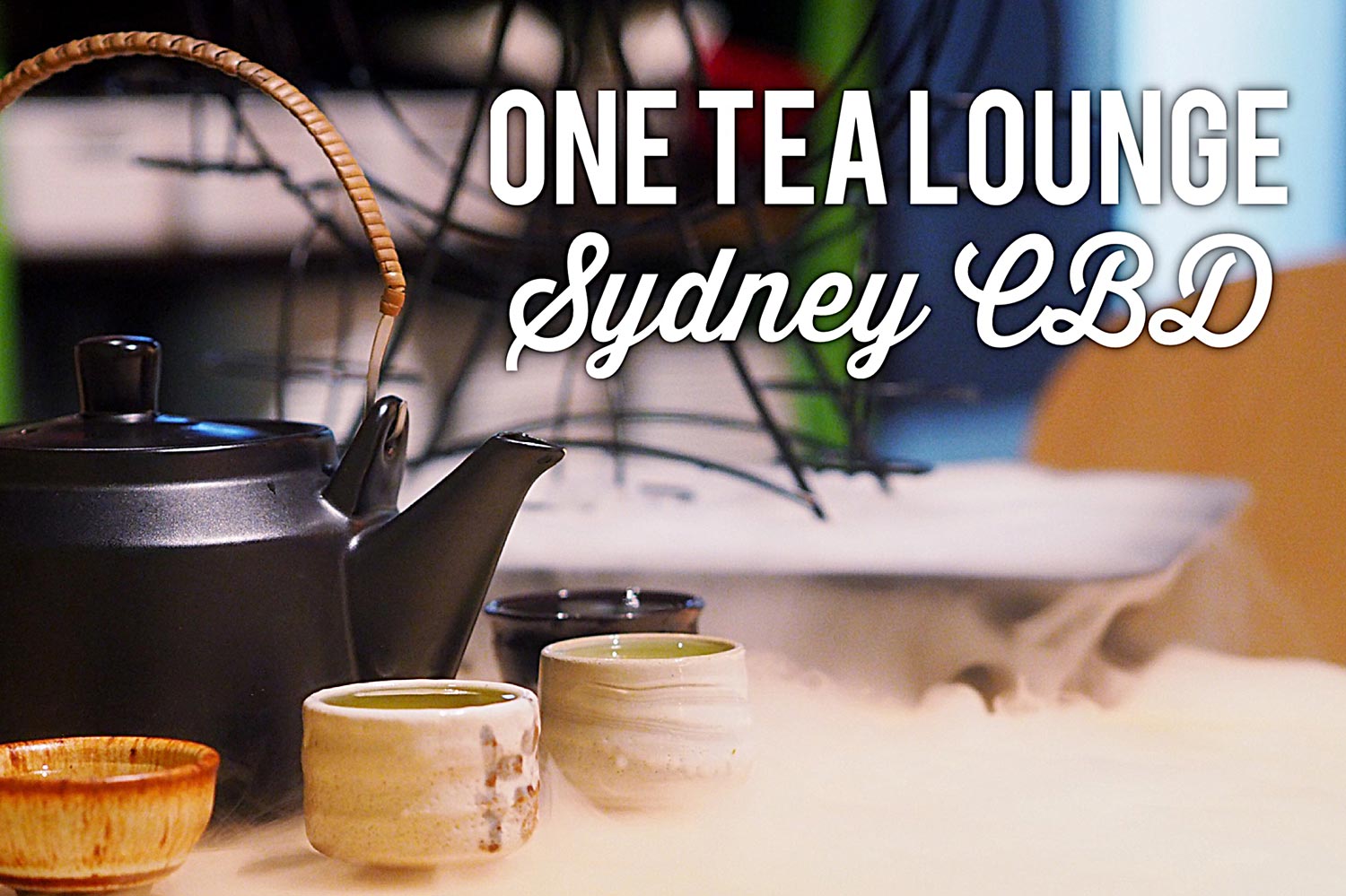 It’s not easy being green: One Tea Lounge and Grill, Sydney CBD