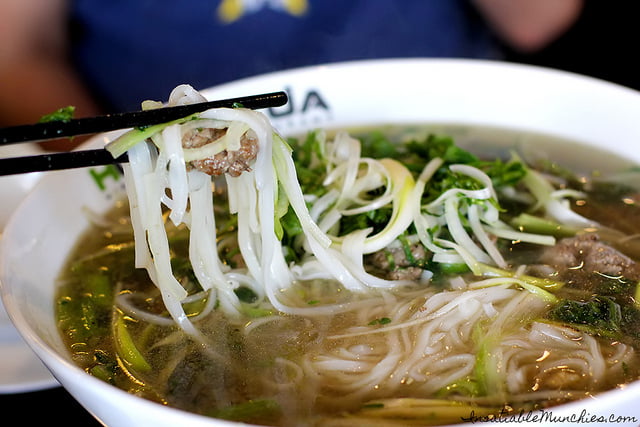 Three restaurants down, and three to go in the epic food crawl with Thang, Isaac, Amy, Christine, Jeroxie and Kate! At this point, we’re starting to breathe more heavily, and feeling that fullness that comes with a satisfying meal.

We mosey along two doors down to Huong Xua – which means ‘fragrant home’ – home to the 1.5kg pho challenge.

But before we talk about the massive bowl of deliciousness, Huong Xua very nicely brought out other plates of food that were chef’s recommendations. Their cuisine is very much more that of Northern Vietnam, with lighter, more delicate flavours, as opposed to the hard-hitting flavours of the South.

Their deep fried spring rolls uses rice paper instead of egg wrappers, causing it to puff up in a way that reminds me of the most delicate of pork rinds. Carrot and woodear mushrooms add texture to the filling, and the dipping dunking sauce provided was so much lighter and thinner than most Southern Vietnam sauces that I’ve been exposed to, and contained pickled radish and carrots.

The poached chicken reminded me of the Hainanese Chicken that is signature to Singapore, except that it was much leaner and more delicately flavoured. The typical accompaniment to this dish is a wedge of fresh lemon, and a salt, pepper and herb mixture that is deceiving in its simplicity. The salt had a dill aroma to it, bringing out facets of poached chicken I’ve never tasted before. There’s something curiously comforting about it. If you prefer, you can also get a ginger sauce to go with your chicken instead.

But the main attraction has got to be the Pho challenge.

500g of beef is first stir-fried with celery, garlic and onion for flavour, then added to 500g of flat rice noodles, and then topped with hot beef broth. The bowl is larger than the size of my face – and I have a pretty wide face – and I can’t stress how much food it actually contains. For reference, an average Australian portion of food is about 750g. So this bowl could probably feed a small family.

If you think you can down this bowl of Pho – all the ingredients and soup – in 11 minutes, you get to eat for free, and keep the bowl! The current record’s for 6 minutes, so good luck with it!! I believe in you!!!

And just when we felt like we couldn’t eat a single bite more, we headed down to Chi and Co. The concept behind Chi and Co. is that the owners wanted to bring the trendy style of Surry Hills to the west, and offer something that is a bit different to the rest of Canley Heights. They offer a fusion of Thai, Malaysian and Vietnamese cuisine, and have built up the restaurant in an old industrial warehouse, keeping the original exposed brick walls and open ceiling. Trés chic!

One step into this trendy bar and you’re instantly transported to Surry Hills. It was like teleportation travel it was so cool. We were first welcomed with a variety of drinks, fruity and nicely balanced. Well, from what I can tell from my little sip of each. The most interesting of the drinks to me had to be the Lychee-tini. A sweet lychee liquor fills the bottom of the glass, topped with a fragrant foam on the top. And you know me, I love a good foam.

And because there were some of us who couldn’t drink – *ahem* me included – they also very generously presented us with a selection of cocktails as well.

I had the Coco loco, which had fresh coconut, lychees and strawberries. Even though I don’t like coconut flavoured things, I absolutely LOVE fresh coconut and coconut juice. And this was absolutely my kind of Mocktail. Refreshing and not too sweet, this was actually quite thirst-quenching, which helped immensely all the food that we’ve eaten so far.

There were also the bite sized cuteness on plates! The Spanner Crab on Betal Leaf had a rich toasty coconut sauce over the top that slightly masked the natural sweetness of the crab, but was still quite morish. The Grilled Scallops nicely showcased fresh juicy scallops, and the Pulled Beef Sliders used tender wagyu beef sandwiched between soft, fluffy sweet mantou buns to create an interesting fusion of cultures and flavours. The Tapioca Shots were creamy, and the palm sugar syrup over the top made it rich and sticky sweet. Perfect to finish a meal if you have a sweet tooth.

At this point, we were rolling along, clutching our full bellies. But there was one more stop to go, and being full will not stop us!

Holy Basil was our 6th and final stop, and out came a massively large serving of their signature Fried Ice Cream. A wedge of vanilla ice cream is coated in a thin crispy crust, sitting atop a dark syrup, and garnished with toasted coconut and a sprinkle of icing sugar. And just when we were prepping ourselves to share the portion, out came five more.

Yes. We had one of these babies each. Bowled over by the generosity and the sheer amount of food, I don’t think we actually finished the whole thing. Well, except Isaac, who powered through it all. Much more appropriate to the mood – I felt – was the strawberry smoothie, with its fresh fruit flavours adding a much needed finishing note to a full lunch on a hot day.

Above the absolute feast that we had that day, what really struck me was the friendliness and hospitality of everyone. They were all so proud of the cuisine and the food, and really welcomed us like family. It’s definitely opened my eyes to certain dishes that I wouldn’t otherwise know to order, that are so much more special than the usual fare.

Hidden foodies gem? I think so! Definitely would love to go back some time soon.

Note: Tammi of Insatiable Munchies and the other bloggers mentioned in this post dined as guests of Fairfield council and the restaurants listed.