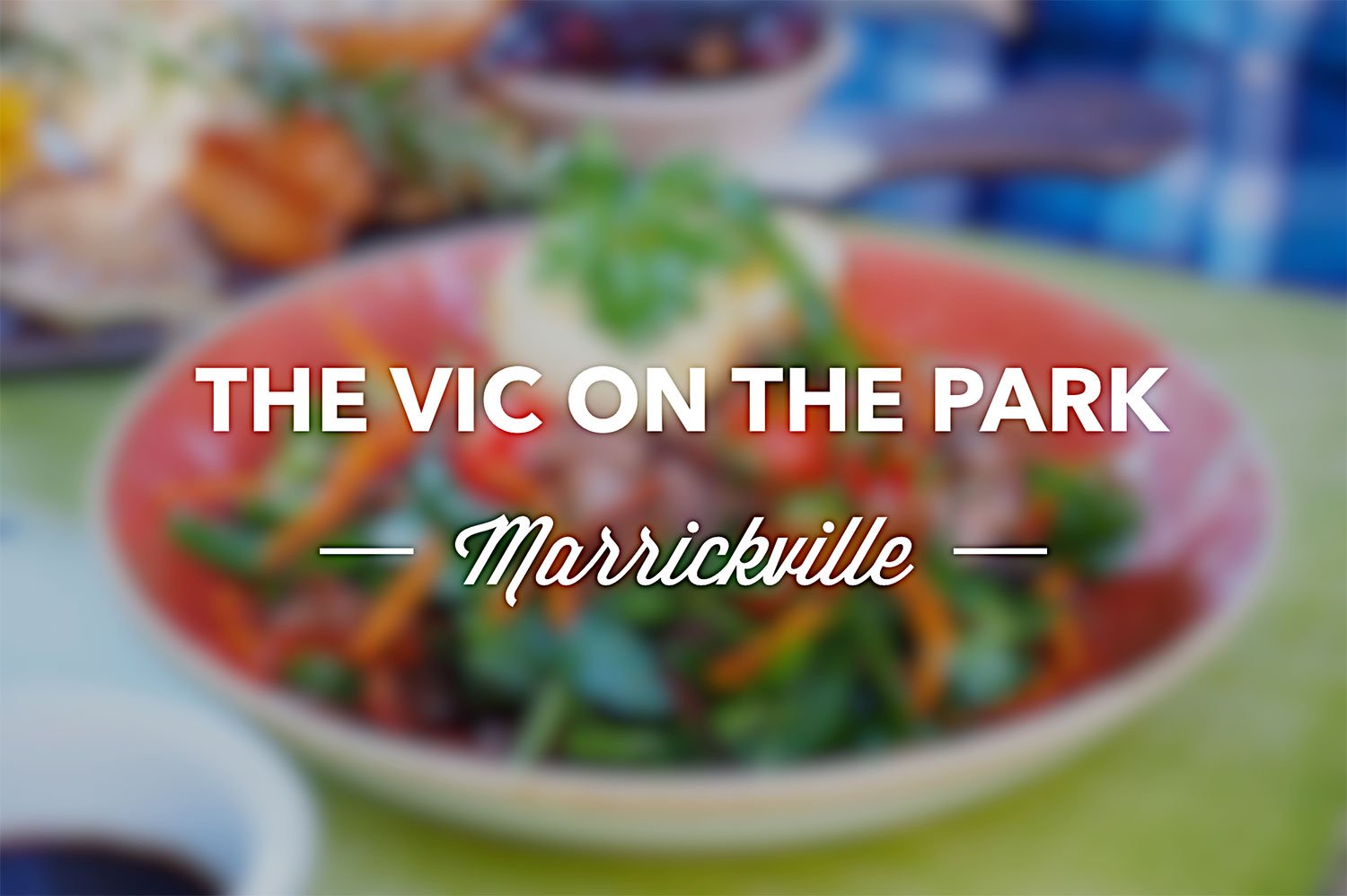 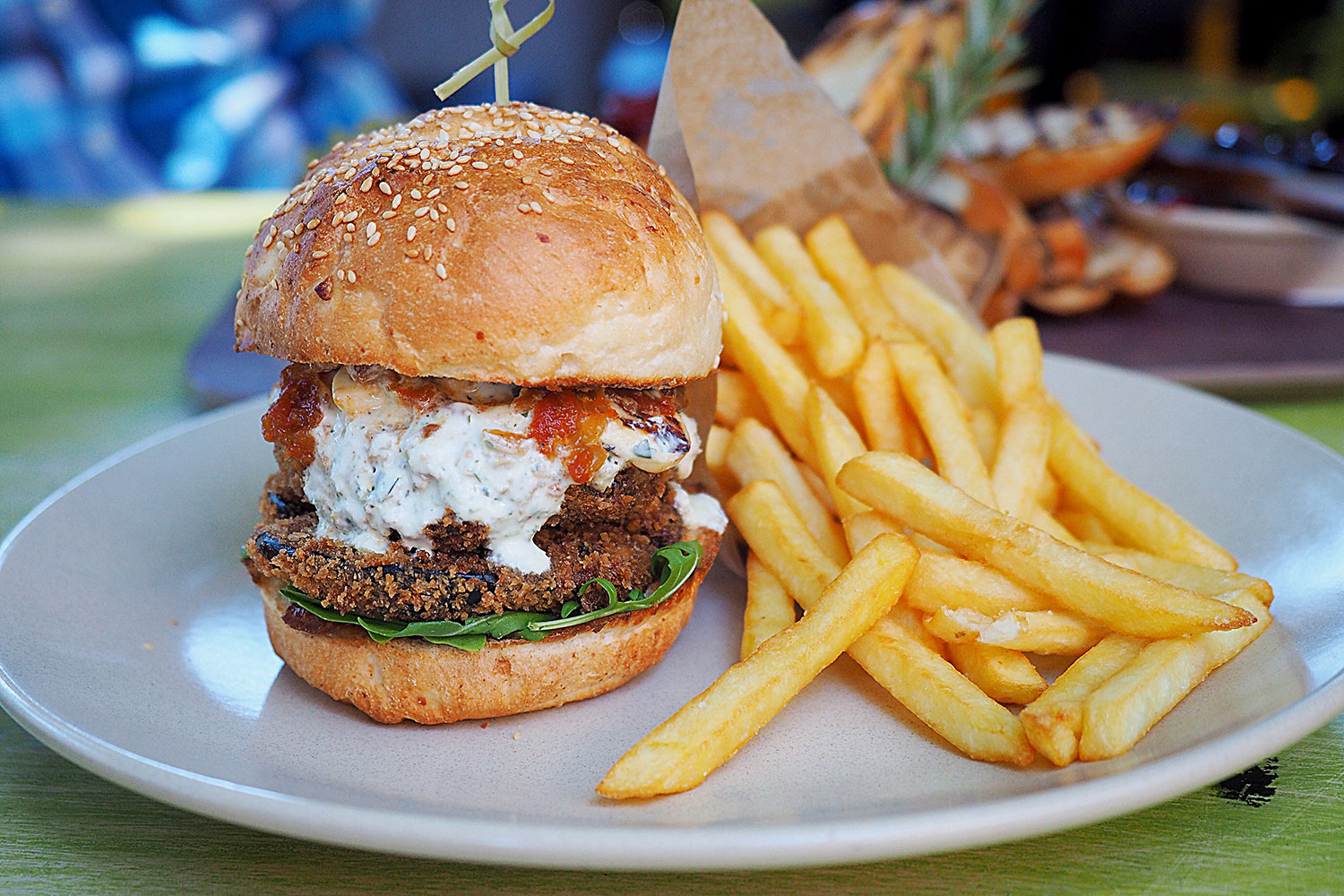 I never knew Marrickville was such a foodie’s paradise. From smokey meats and amazing Yeeros, to endless rows of Vietnamese restaurants, Marrickville is my new go-to suburb when I’m feeling like trying something new.

So The Vic on the Park faces some stiff competition, especially since they’ve just launched a new menu with a brand new head chef.

Want to know how it all stacks up?

The menu is split into two sections: the regular menu which has all the old school pub favourites like steak and salt and pepper squid, and the more experimental Specials Menu that changes weekly, which we ordered from.

As always, it’s very hard to get everything bang on, but their strength seems to lie more in their concepts more than their execution. 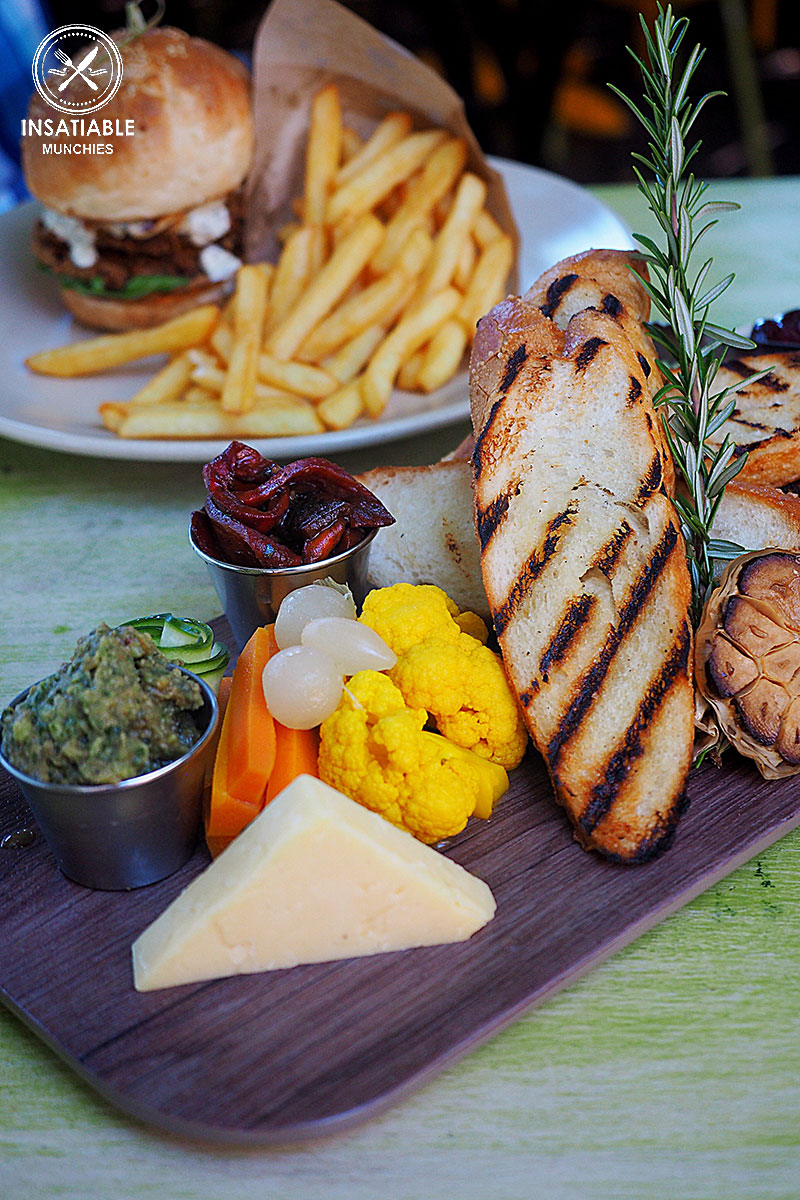 The Share Board, $20, made a good impression. I’m told by the chef that the olives were pickled in house, and that, with the fragrantly soft baguette, made for a very appetising starter to our meal. 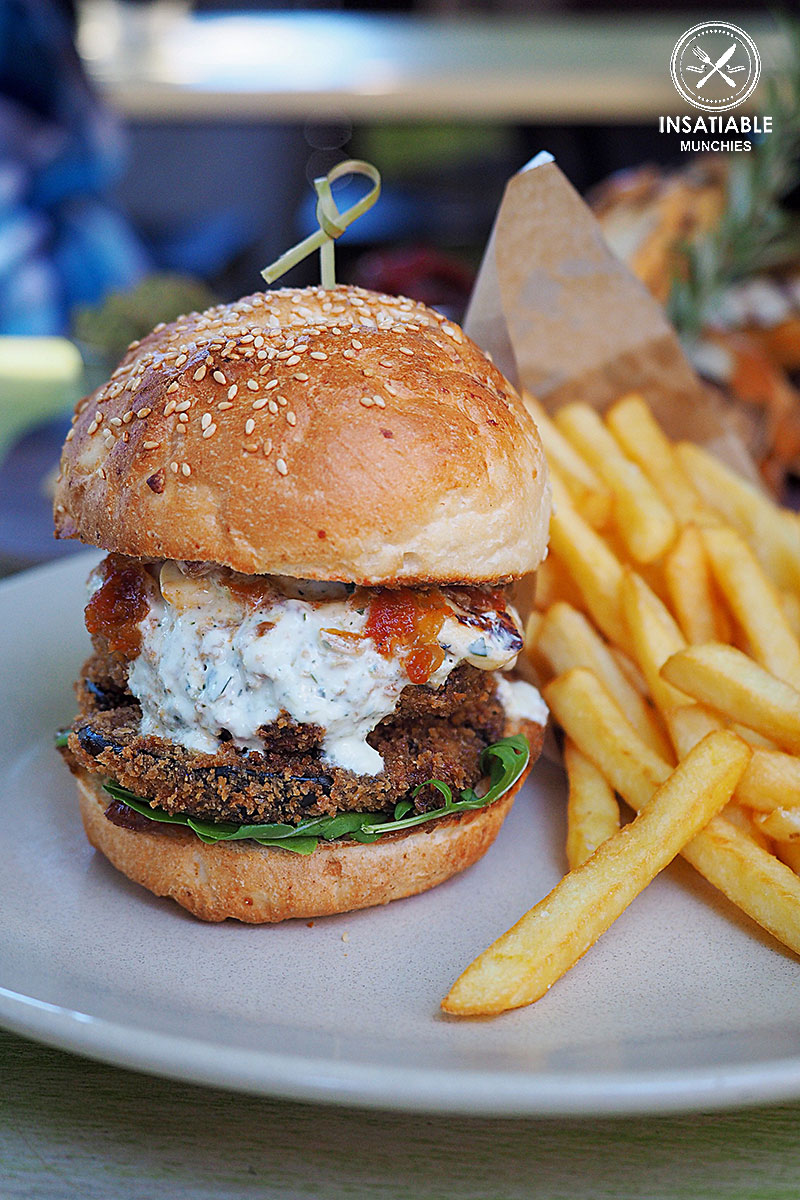 We then moved on to the Crumbed Eggplant Burger, $18. It was one of the better vegetarian dishes I’ve had – I think Vegetarians would automatically give it points for not being a risotto! The homemade relish added a sweetness, which I liked, but Simon did not. The burger had a clear middle-eastern influence, though the flavours were somewhat muted through the burger. Not a good idea especially in a suburb like Marrickville where you can get amazingly robust Middle Eastern food. 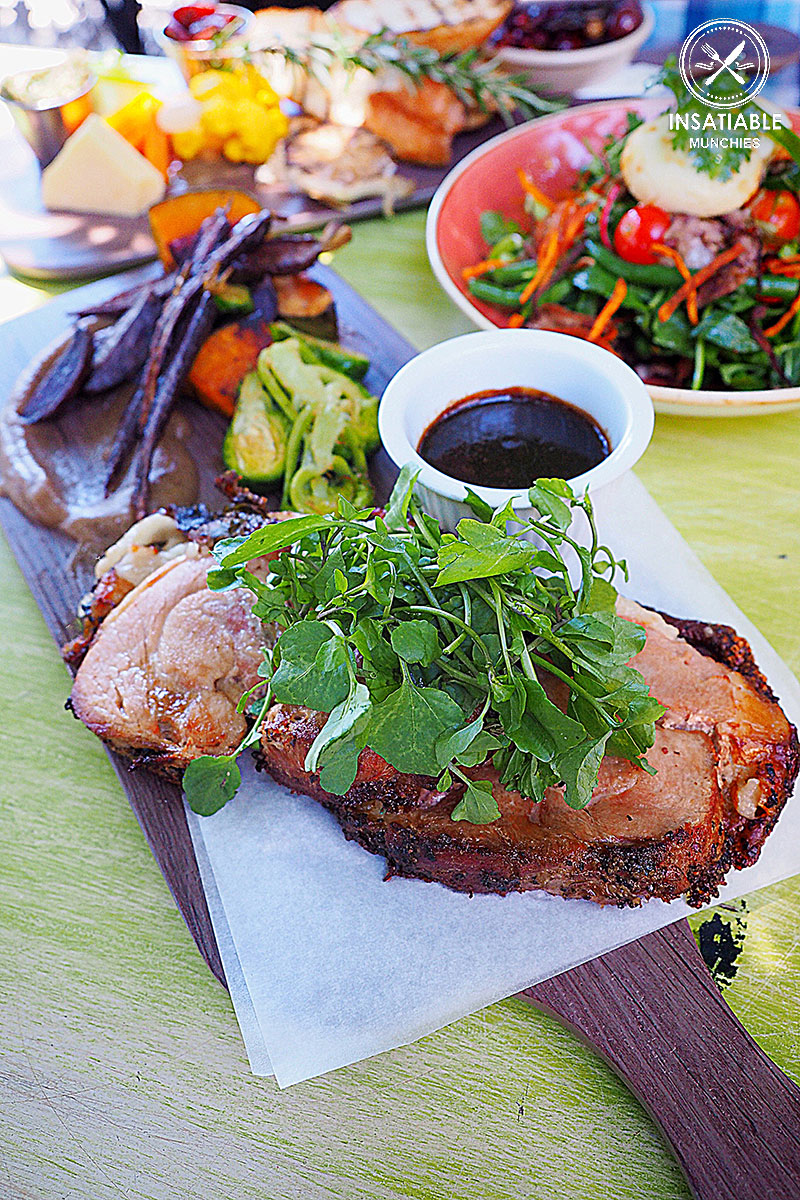 The Premium Pork Roast Share Board for two, $55, sounded like fancy pub food, but was executed like, well, regular pub food. The pork, which was meant to be slow roasted, was on the dry side for me. Kinda says something when I enjoyed the veggies over the meat, doesn’t it? But the best part of the platter had to be the apple brandy jus. Dark and rich and gloopy – it went perfectly with the roasted veg.

Oh, and for bonus points: even though the pork was a bit dry for us, we found that it worked with the share platter. We just cut it up and sandwiched it between two slices of baguettes, with the house made pickles. Just like a Banh Mi, only…not. 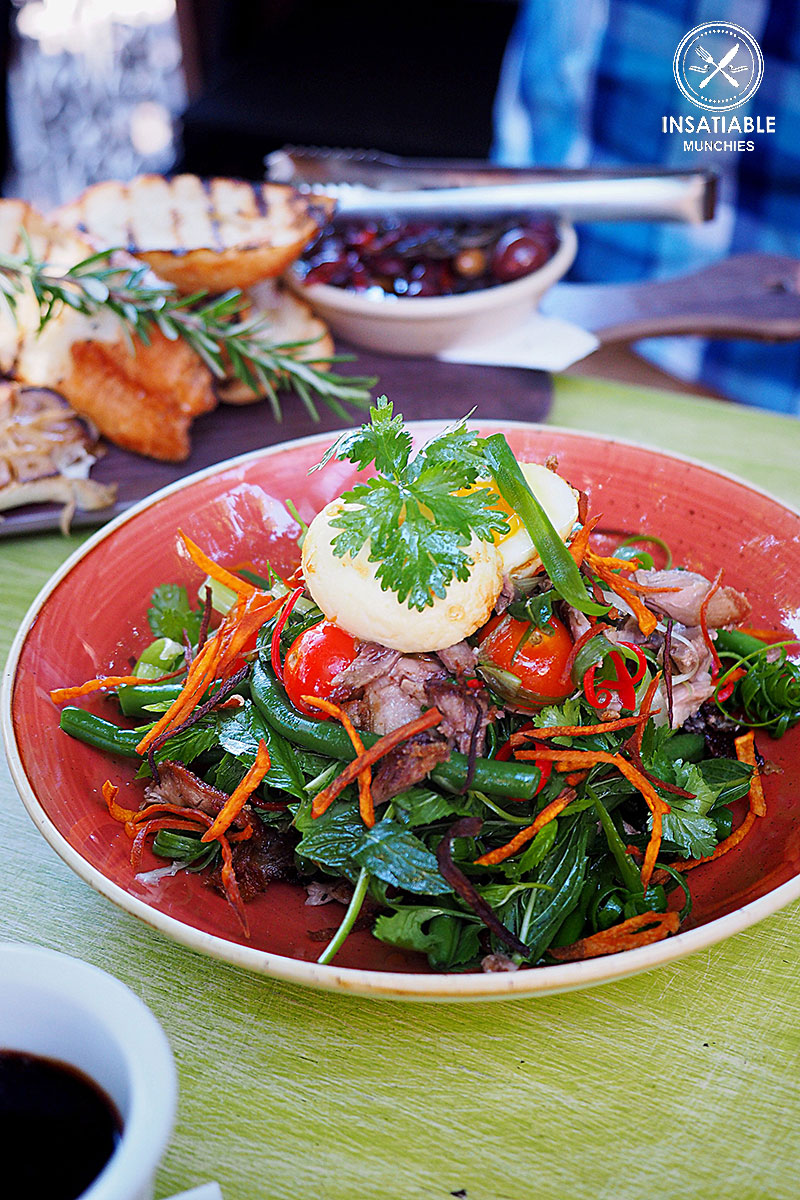 For a more summery dish, we ordered the Warm Duck Salad, $25. The veggies, while crunchy and fresh, could definitely use a whole heap more flavour, and the sweet dressing was not really bringing any sort of punchiness. And with many vibrant salads that make their appearances all over Sydney, this one just doesn’t quite make the cut. 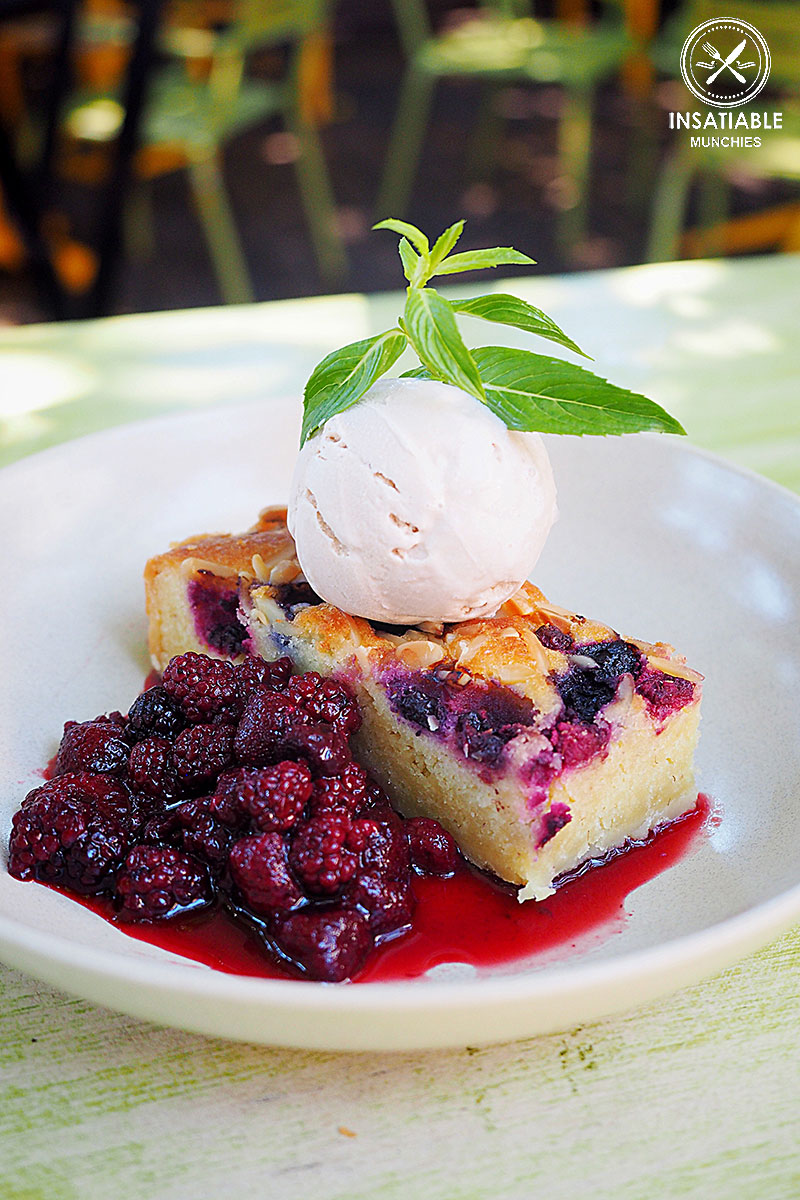 And finally, the Berry Tart, $12. The tart came out looking more like a tea cake to me, which was quite perplexing, but after awhile we figured out that it was cut from a much larger, rectangular piece. Fair enough, except that the frangipane filling was quite heavy for my taste, and there wasn’t much discernible different between filling and pastry, which really means it might as well have been a tea cake for me. The berry compote, though, was a saving grace, and I ended up really enjoying the softened berries with the ice cream by itself.

I’m not sure how much I can say about the service since we were invited guests, but from what I can see, they are quite friendly and helpful, efficiently clearing all the tables in the area and greeting the diners (not just us!) with a smile on their face. Everyone seemed to have a basic knowledge of the menu – which can be quite challenging with something that changes weekly – and that’s more than what I can say for most pubs that I’ve eaten at.

Not that I’ve eaten at that many. ☺️

It costs a pretty penny to dine at The Vic on the Park. In my experience, Sydney burgers cost mostly anywhere from $10-$20 on average, and for an eggplant burger to cost $18, well…the price rivals even the most popular burgers in the CBD.

It works out roughly about $30 a head to dine off the specials menu, and I’m not sure that it works for me, considering the amount of affordable and satisfying eateries that are dotted all through Marrickville.

Filled with locals, The Vic on the Park has a very relaxed vibe to it, with sports playing in the background and a lovely outdoor area shaded by trees. The mix of distressed wooden tables and laminate-topped ones give off a trendy but not hipster feel, which is reflected in the mixed clientele of tradies and families. I can totally see it as an after-work hangout for locals, although I’m not sure that you would make a trip out if you weren’t already in the area.

It’s always hard for a new head chef to come in and change things up, especially with something that has been there as long as The Vic on the Park. So kudos for that. I’m not sure whether her specials menu is there to feel out what the diners want, but I do know that it’s going to be hard to train cooks up to raise the standard when a 15-dish menu gets changed out every week.

Not quite my idea of destination dining, but I guess if you’re in that side of Marrickville and don’t want to travel too far, it’s not a bad place to go to.

Insatiable Munchies dined as guests of The Vic on the Park.