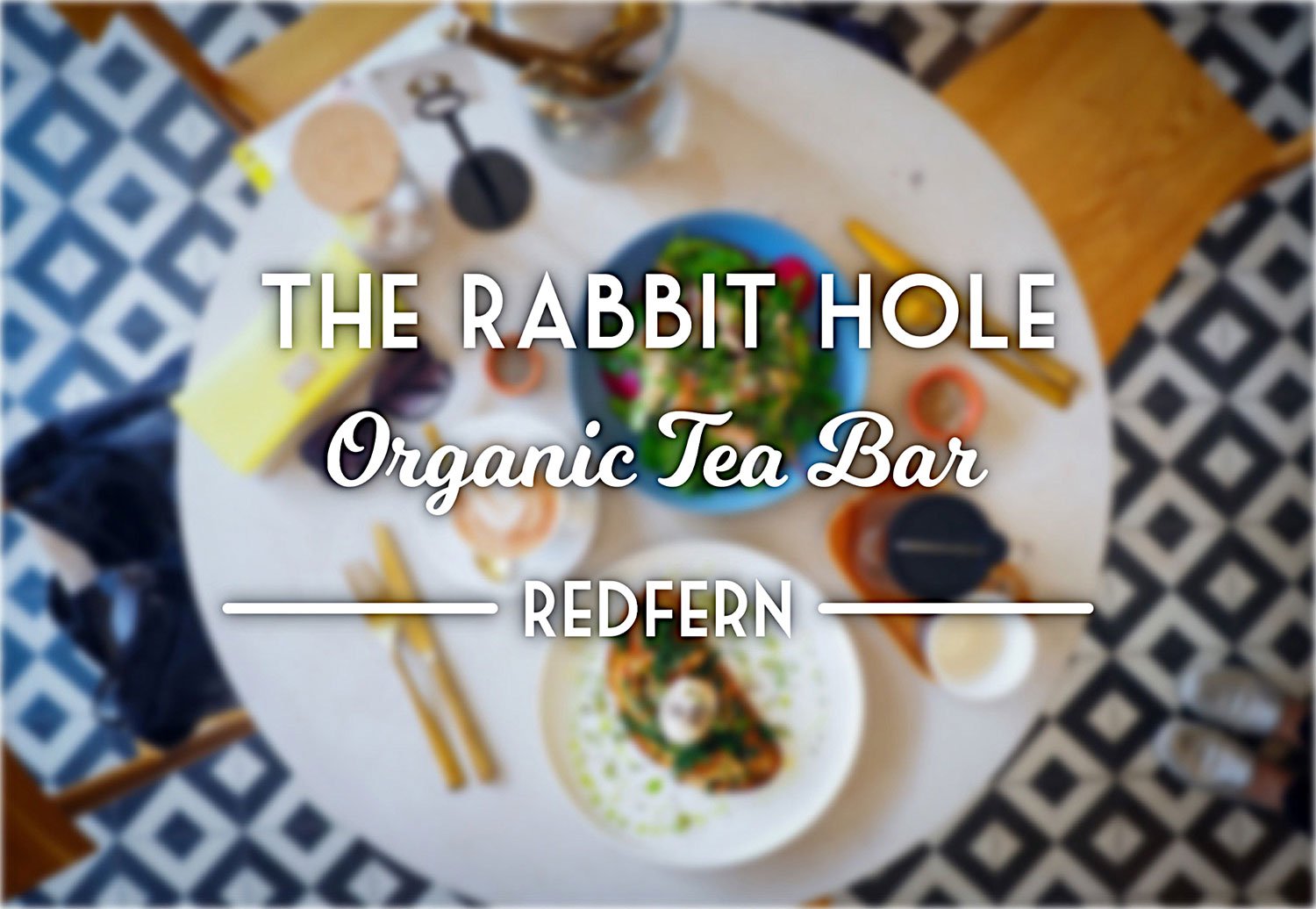 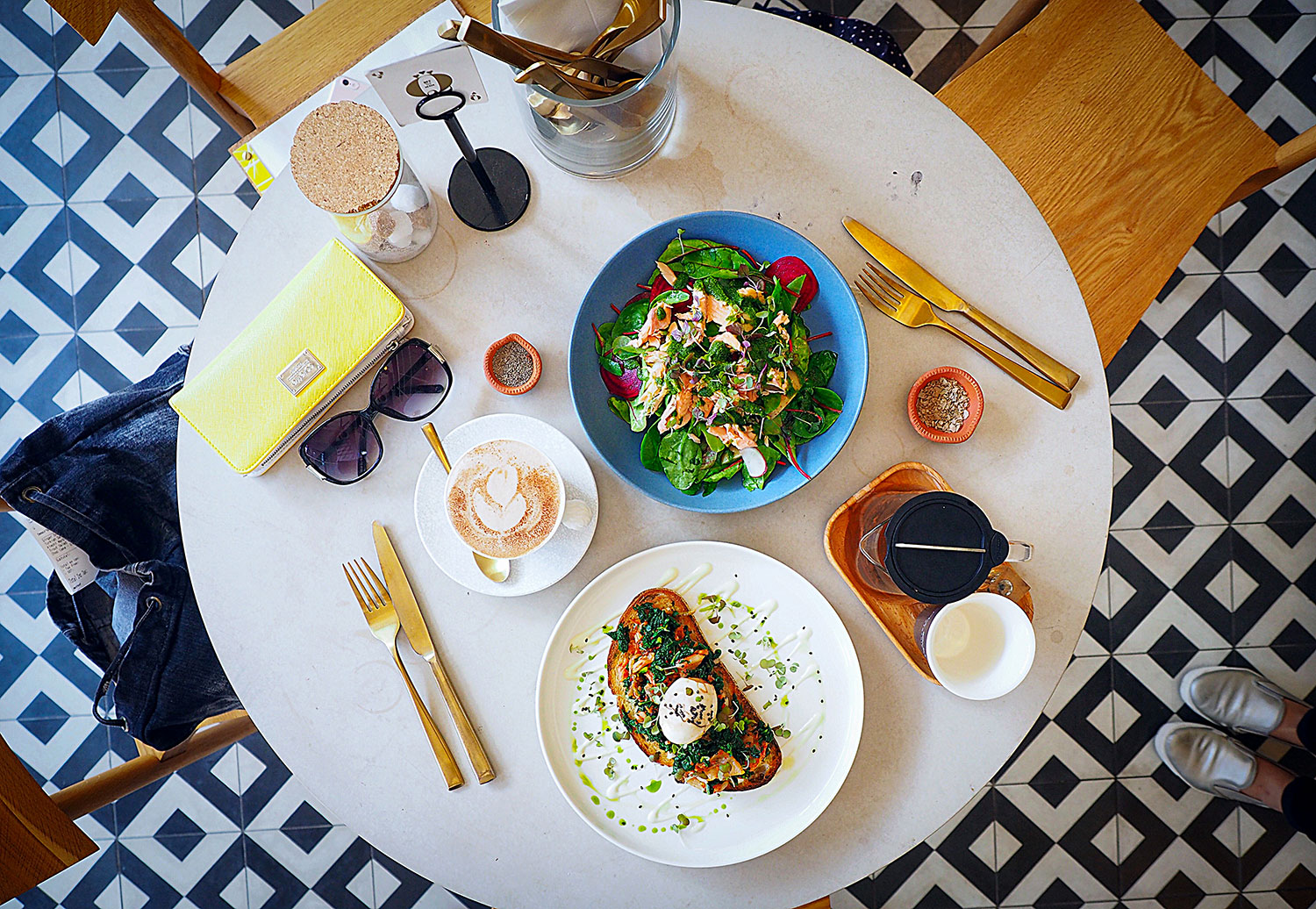 Even when I was too young to fully understand it, Alice in Wonderland has been one of my favourite Disney classics. And yes, I know that it’s…uncouth of me to talk about the movie and not the book, but I’ve always been partial to a happy song. You know that. 😉

So when The Rabbit Hole Organic Tea Bar popped up on my “to eat” radar, I just knew I had to make it down there quickly, as if the white rabbit was tapping on his pocket watch impatiently. Cause the only thing I love better than a good schtick, is a theme that is expertly and sophisticatedly carried out.

Okay, full disclosure here: I was actually expecting the food to be fairly crap. I mean, generally, finding a cafe that hits up a fun theme, serves up well executed and presented food, with good service? It’s like discovering a damn unicorn. 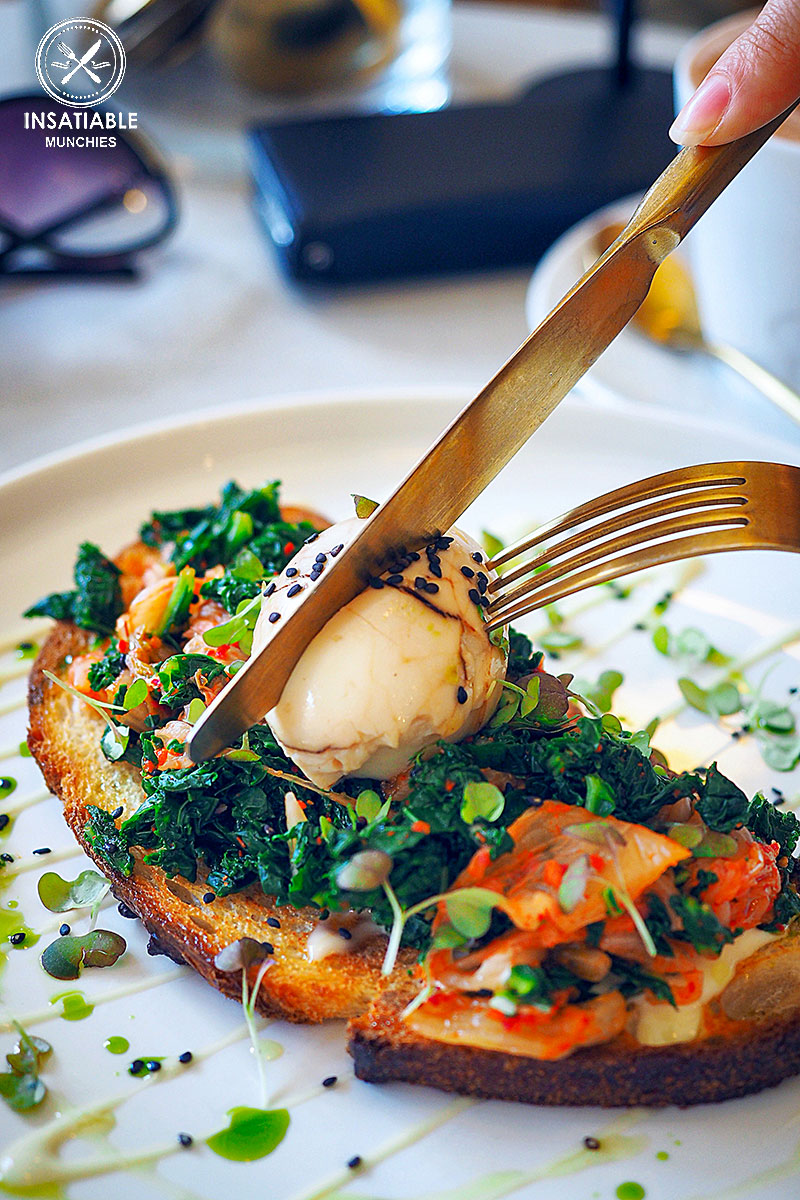 So you can just imagine my excitement when I found out that the food, was actually pretty awesome. I loved the subtle inclusion of tea in certain dishes, like the Tea Marbled Egg with Kimchi, Kale and Black Sesame, $16. Tea marbled egg isn’t a new thing, by any means – the Chinese have had a similar idea for aaaggeeesss – but I felt like I found a kindred spirit here. Especially when I found out that the egg was marinated in the smoky Lapsang Suchong tea, like how I love to do them at home!

What kept it from being perfect, though, was the subtleness of the tea getting overpowered by the riot of spice and tang from the kimchi, and the grey ring of death that indicates an overcooked yoke.

Small thing, I know, but it’s a really basic quality that I’ve come to expect from otherwise good cafes like this one, and it really ruins the impeccable illusion. 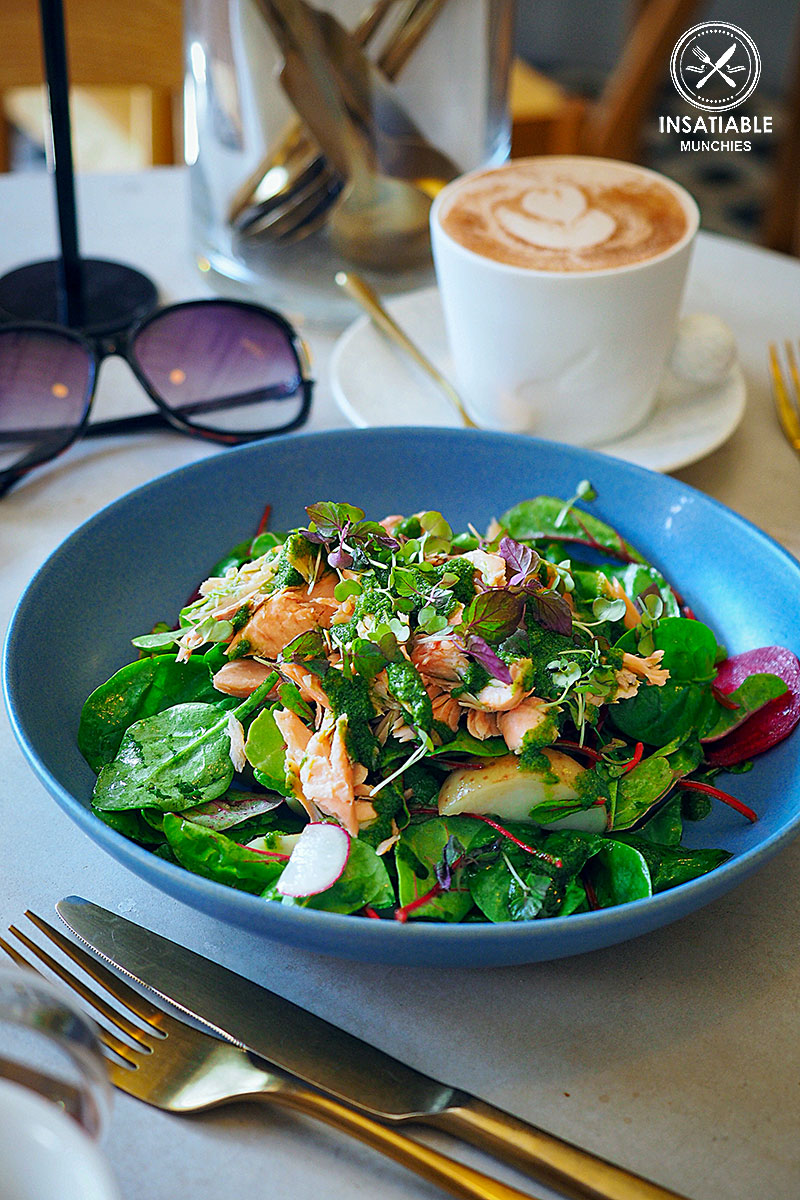 The Rainbow Trout Salad, $18, was also a delight, with oily, luxurious flakes of hot smoked tuna generously flaked through halves of boiled chat potato, fresh slices of radish and sweet beetroot, and green salad leaves. Okay, so they’re not pulling Devon-level creativity with this one, but for something that was executed with finesse AND satisfying? 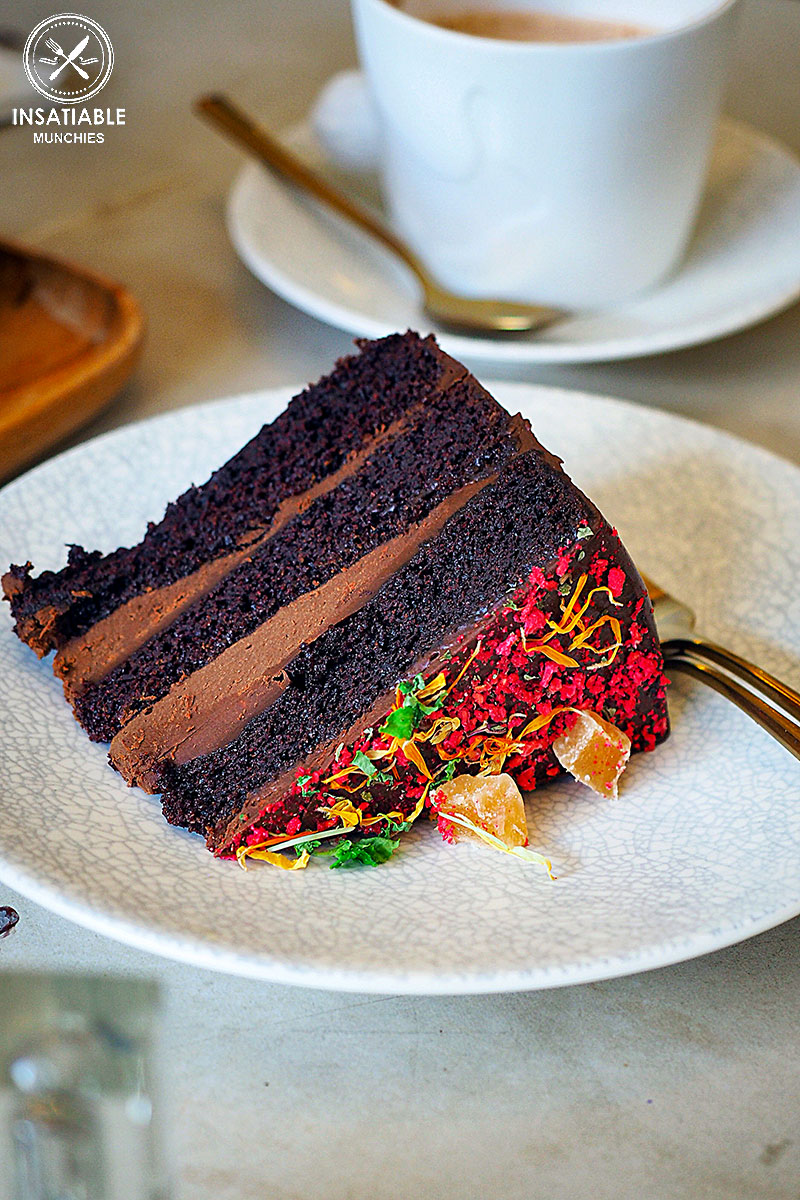 But my favourite part of the whole meal, was the Ginger and Chocolate Cake, $8. A gargantuan slice of chocolate and ganache layered cake is topped with freeze dried berries, edible flowers and glace ginger gives you a mouthful so rich it’ll turn your teeth black. And I’ve never been so happy to look like I’ve got the oral hygiene of Captain Jack Sparrow. The cake itself toed the precarious line of being rich without being doughy, and the ganache was buttery, without leaving an oily film in your mouth. The ginger pieces just gave it a necessary zing to balance it all out, and float you slowly up to cake heaven. SAH GOOD.

Did I mention that they bake all of the sweet treats in-house? Impressed, I am. On the tea front, the Ginger Snap Latte was my favourite: the aroma of cinnamon and Christmas surrounding me as soon as it hit the table. Also not as sweet as I thought it would be, so I felt like I was a real adult drinking it. The Turkish Delight wasn’t quite, well, conventional as I was expecting it to be – the cacao nibs provided a strange savoury note, and the rose petals didn’t come across as strongly as you would expect from a Turkish Delight. A bit of a shame: it wasn’t bad, it just wasn’t the Turkish Delight that I wanted.

The Rabbit Hole Organic Tea Bar doesn’t really provide table service. You take note of your table number, and then pop up to the counter to order and pay. The food does get served to you, but this pared-back system means that it leaves weak spots in the experience. For example, the table that we were at took so long to be cleared that we ended up moving the dirty plates and cups to a recently-vacated table ourselves. When it came to the food, we were missing the cake (I thought that they were just taking a while to bring it out) until I went up to the counter to ask about it. Not the best on a quiet afternoon.

However, they were otherwise extremely pleasant to speak to, and showed an intimate knowledge of the food when I wanted to know more about the menu. The mixup with the cake was gracefully sorted – a quick apology and the slice came swiftly out, complete with two forks (they remembered that we were sharing!).

At first glance, it would be easy to label The Rabbit Hole as ‘overpriced’ – $16 for a hard boiled egg with pickles and toast? Amirite? – BUT when you consider the classy surroundings, inner-west location, passionate staff, and thoughtful menu…I’d say it’s well within reason for what they’re asking.

…seriously, though. It’s executed with such sophistication that I felt both like a child AND an adult coming here! From the rabbit tail coffee cups, to the tarnished gold cutlery, to the playing cards that double as table numbers, this is a place that knows its identity, and expresses it with more class and anointed with a hint of whimsy.

If Alice was the cafe type, I’m sure she’d come here too.

The Rabbit Hole Organic Tea Bar definitely runs on the strength of its ensemble, rather than one particular schtick. The food didn’t hit the same creative concept as, say, Edition Coffee Roasters, and the surroundings didn’t transport you in the same way as the Alice in Wonderland high tea that I went to at The Waiting Room, but it does present a sanctuary from everyday life, albeit one with a foot still firmly in reality.

Definitely somewhere I’d pop by again if I were in the area, but I wouldn’t make a special trip out otherwise.