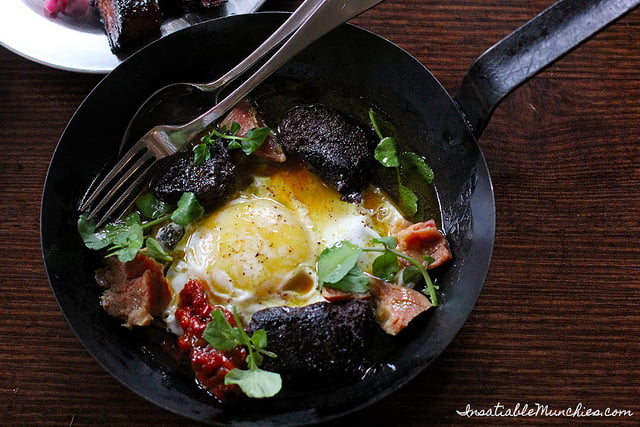 Maybe it’s because I’m a glutton for the weird and wonderful, or maybe it’s because I have strange preferences, either way, when I heard that 4Fourteen offered an offal set menu, it became the next big place on my eat list.

Because I naturally have food associated ADHD – also known as the ‘Piggy Eyes’ – and cannot just order single items, I went through the menu and had a field day. I had considered ordering the 4 course menu for $75/person, but with two diners, that meant that we could have 8 different dishes, instead of 4!

The menu consists of smallish items that are meant to be shared and enjoyed amongst friends. The I don’t know whether the courses come as they are ready, or whether it came in a particular order to create an arc to the dinner, but whatever it is, everything struck me as deliberate and well thought out, contributing to the overall dining experience.

The Fennel and Yoghurt Ice Pop with King Alaskan Crab was light and almost fruity in its flavour. The ice pop brought a light tanginess, with the fennel proving accents of liquorice. It was an enjoyable salad in itself, but in my opinion, the ice pop was just a touch too large, making in mildly difficult to eat – especially when I’m the kind of person who likes to have a little bit of everything in every mouthful.

Our Pan fried Duck Eggs with Ham Hock, Black Pudding and Red Pepper came next, and was impressively set down with frypan in tow at the table. The pale yellow yolk of the egg trembled and wobbled with every shift of the pan, and oozed lusciously when it met with the prongs of my fork. The black pudding was gnarly and dark in its texture and flavour, and provided a hearty richness to the dish. Hits of capsicum relish provided the lighter notes, and the chunks of ham hock provided a great texture and bite. It was absolutely a delight to eat, and every rich bite was savoured with delight.

The Glazed Lamb Ribs were simple and tasty, but in the light of the more imaginative dishes on the menu, fell a little more towards the average side of things.

I’ve only had lamb’s tongue on a few occasions, and have always been fairly ambivalent towards it. But given the reputation 4fourteen has with offal, I was looking forward to the Chargrilled Lamb’s Tongue with Sweet Cucumber, Cos Lettuce and Mint Jelly. This beautiful, light salad was a fresh way to serve dainty pieces of what could be a chewy piece of meat in an extremely delightful salad. The mint jelly was an absolute surprise – I’m not the biggest fan of mint sauce at the best of times – and there was a moorish quality to it.

Bone marrow is one of those foods that may seem like an odd idea to some, but is actually the most unctuous, luxurious treats when you get to try it. I think it started as an absolutely brilliant effort to eating every last bit of the animal, and is now starting to reach cult status. The Persians have it in stews, the Southeast Asians make a strong soup fragrant with spices. Here at 4fourteen, it’s served simply – topped with woodsy herbs and browned to release a sweet, oily flavour that coats the tongue and the roof of the mouth, giving me the most primitive sort of high.

At this point in the meal, we were actually quite satisfied and full, but there was just one more dish to go – damn those piggy eyes! – and the Smoked Beef Brisket arrived, humble and unassuming, topped with monster roast potatoes that were crispy on the outside and soft and fluffy on the inside. The brisket was hearty and dark, with the smoky flavour carrying through to the sauce it sat in. Nice as it was, the bone marrow simply topped the meal for me, and half the dish ended up in a doggy bag for my lunch the next day.

The whole experience at 4Fourteen was thoroughly enjoyable – the service staff were just attentive enough, which meant that I got to ask all the questions I wanted to ask, but at the same time got the opportunity to enjoy our dinner in peace. The food was delicious and comforting, like sitting under a thick quilt on the coldest winter day, and each dish was deliberate and balanced – something I was immensely impressed by. I also felt that the food was absolutely value for money, especially for the quality that we enjoyed.

Definitely something to go back to, even if it’s just to try the rest of the menu!!